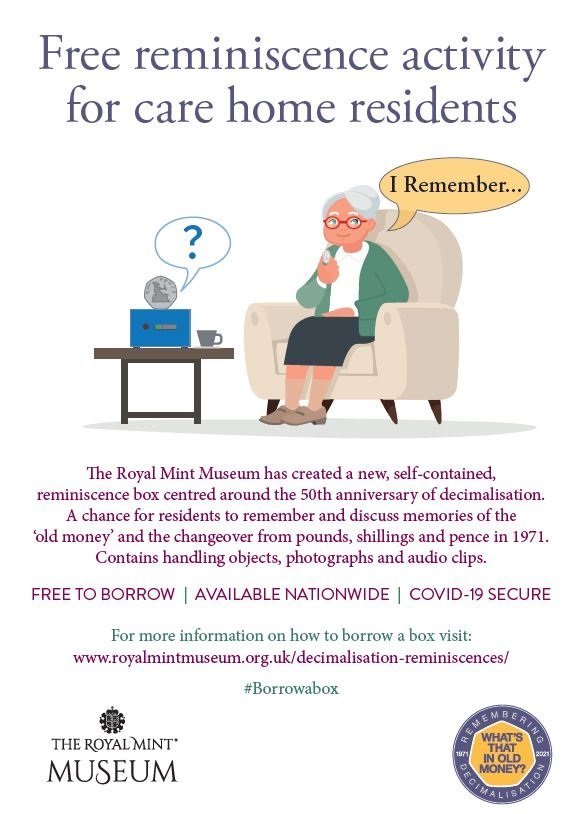 The reminiscence session takes the form of a Museum in a Box, which contains originals and replicas of objects from the time for residents to handle, and which when placed on the box play audio clips explaining what the object is or a voice clip from the period.  This can be a fun and stimulating activity for residents, giving them an opportunity to talk about their memories of the time.

Care homes who are interested in the sessions have the opportunity to loan the boxes completely free of charge, with the boxes being quarantined and thoroughly disinfected between each loan.  There are  further resources such as video footage and photographs from the time on our website, in addition to background information and discussion ideas to support staff should they wish to facilitate the session and help stimulate conversation.

The Royal Mint Museum are very pleased to have fully completed 15 loan periods and have a further 43 underway currently in areas from the Shetland Islands to Northern Ireland, Cornwall and Kent. They hope to reach over 46,000 care home residents plus staff before the end of the project. The feedback they have received to date is remarkable, people are really enjoying interacting with the boxes. The project has been shown on BBC Breakfast TV, ITV News and in multiple article in many newspapers such as The Independent.i.e, The Telegraph, and The Daily Mail.

The project is open to care homes in the whole of the UK as part of the celebrations of the anniversary of decimalisation.

If care homes would like to express an interest in loaning a box they are able to let us know at the below number or email address.  You can also find out more information about the project on their website, at http://www.royalmintmuseum.org.uk/decimalisation