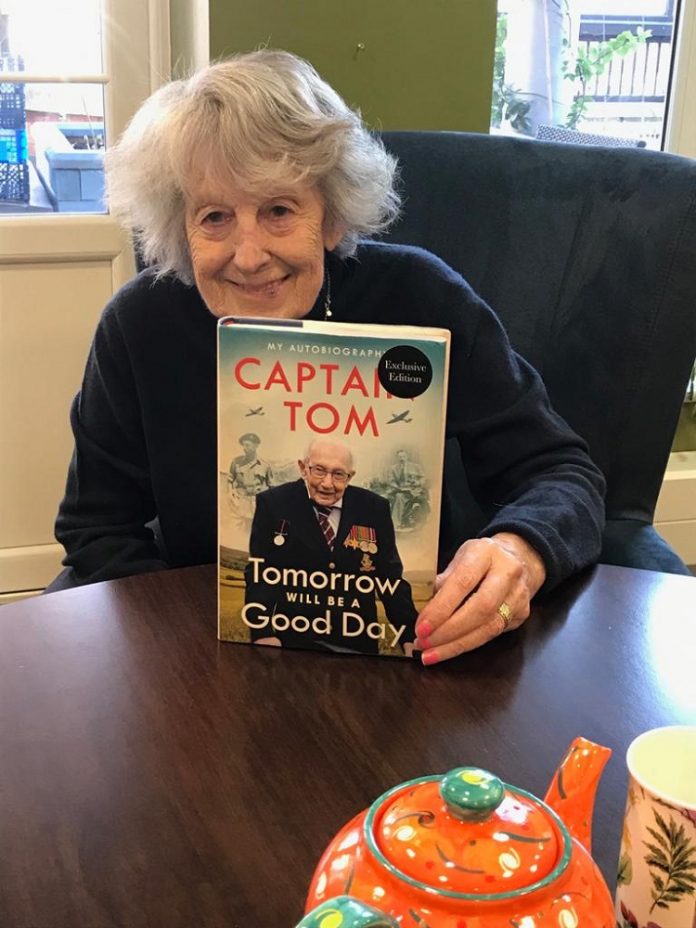 A new book club has been launched for people living with dementia at a Surbiton care home.

Royal Star & Garter, which provides loving, compassionate care to veterans and their partners living with disability or dementia, began the club in January. They chose Captain Sir Tom Moore’s autobiography Tomorrow Will Be A Good Day as their first read. The book’s publishers thanked the Home for choosing the book to launch the club, and praised the charity for the work it does.

The launch coincides with the National Storytelling Week, which runs from 30 January to 6 February, and promotes the importance of storytelling for learning, wellbeing, and enrichment of life.

The club is run by Activities Coordinator Dawn Cherrill and resident Maureen, who is living with dementia. Both have experience of working in libraries.

Residents at the Home can pop in to the book club, enjoy a hot drink and listen as Dawn or Maureen read extracts. Photos from the book written by Captain Tom, who raised millions of pounds for the NHS last year by walking around his garden, will be placed around the room.

Dawn, who worked in libraries for Hounslow Council for 19 years, said the idea came about when discussing a Christmas present she had received with Maureen: “It was Tomorrow Will Be A Good Day. The book looks at 100-year-old Captain Tom’s life, and how he grew up in Yorkshire on the foothills of the Dales. I told Maureen it is inspiring, and she suggested we start a book club. The book has many photos which we will enlarge to show residents, and because of his military background I think it’s a great choice to launch with. I hope for much chatter in book club, and I’m sure it will trigger lots of memories and lead to lots of reminiscing over tea and biscuits.”

Maureen said: “There is a book for everyone. For some they just haven’t found it yet. Book clubs are important to explore different books together.”

Dawn added: “It’s wonderful to work together with Maureen, she is a big part of the club and has been really involved. She’s asking other residents to join us and getting great feedback.”

In a special message to the charity, publishers Penguin Michael Joseph said: “It has been an honour to work with Captain Sir Tom Moore on the publication of Tomorrow Will Be A Good Day and we are delighted that the veterans at Royal Star & Garter have chosen it as their first book club pick. The brilliant work Royal Star & Garter do in caring for veterans is so vital and so in line with Captain Tom’s ethos. We hope you enjoy the book!”

All three Royal Star & Garter Homes are equipped with libraries and computers, which allows residents to lose themselves in the world of books and literacy.