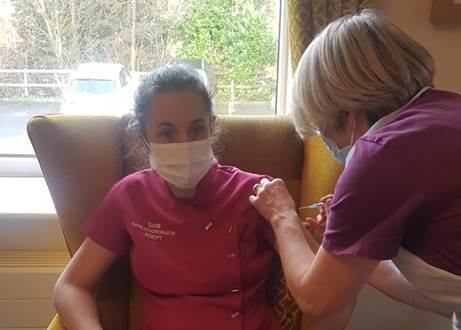 Residents and team at Bowood Court & Mews Care Home in Redditch were one of the first to receive the Pfizer vaccine against Covid-19.

“It is better than having that virus, isn’t it” said Merric Henson a resident at Bowood Court & Mews.

He said he had not worried too much about catching the virus as he felt very safe at Bowood, but he had missed being able to have a hug. “It is human contact you miss. We’ve been so lucky to have visiting rooms installed so we can sit and chat with our families, which I believe, not all care homes have, and some people haven’t seen their families since March but I must admit not being able to hug just isn’t quite the same,” he said, adding “I am looking forward to the day it becomes possible.”

Home manager Kelly Bates said the vaccination “is the early steps towards a beginning of an end following a ‘rollercoaster’ year for residents, relatives and the team.”

Bowood Court & Mews has over 85 residents and over 100 team members of which, the vast majority received the vaccine. “We did this for the safety of our residents and try to bring normality back to their lives” said Sam, a senior care coordinator.

Care residents travel the world without even packing a suitcase