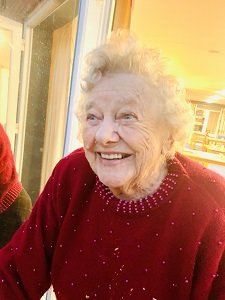 Creative staff at a Sturminster Newton care home put residents firmly in the mood for Christmas with a surprise ‘flight to Lapland’.

Weeks of planning went in at Colten Care’s Outstanding-rated Newstone House to ensure the virtual trip was every bit as magical as a real travel experience.

It began with residents being handed a personalised invite and letter from Santa together with a red ‘Land of Newstonia’ passport complete with their photo – and of course a boarding pass.

They were then asked to present themselves in the lounge to ‘board’ the virtual ‘plane’ at a specified departure time.

As the delighted ‘travellers’ arrived, they were shown to their first-class seats where they listened to a crew member ‘elf’ reading aloud a jokey welcome-aboard poem through a cabin-style tannoy.

‘Take-off’ was arranged with help from a projector showing a pilot’s-eye view of a runway.

Once ‘in the air’, the passengers were treated to mulled wine and port, and ginger biscuits, courtesy of the home’s chef, Donna Singleton.

In-flight entertainment featured a film highlighting some of the typical joys of a visit to Lapland including sleigh rides, sledging, husky dog rides through the trees and calling in at Santa’s post office.

After a few Christmas sing-alongs it was time to ‘land’. As they disembarked, residents were invited to step straight into the open air of their courtyard garden where staff had prepared a feast for their eyes.

“It really was beginning to look a lot like Christmas,” explained Companionship Team Member Rebekah Goddard who, with colleagues, had created a dreamy blizzard-style winter wonderland with a specially arranged snow machine. “There were gasps of surprise as our party of tourists walked out into the snow and took in the twinkly Christmas lights that adorned the trees as well as a brightly lit candy cane pathway. Of course no trip to Lapland would be complete without seeing Father Christmas, so we also laid on a grotto and the chance to meet Santa for a souvenir picture and a chat.”

Asked how the meetings went, Santa said: “It was so nice of Mrs Claus to let me out for the afternoon, especially this late in the season, but the smiles on the residents’ faces were worth every second.”

The return flight included more drinks and nibbles, accompanied by a film about the Northern Lights.

Back in the Land of Newstonia after what would have been a 4,000-mile round-trip in real life, there were plenty of smiles as residents spoke of their joy.

Pat Steer said: “It’s been a while since I went on a plane and in first class. What a treat!  I didn’t expect it at all. The whole thing was just lovely, especially meeting Santa Claus. He made me laugh. It was all very exciting from start to finish.”

Follow resident Linda Porter agreed, adding: “The lights were so lovely,” while Doreen Ashford said: “It was so pretty.”

Reflecting on the success of the experience, Rebekah said: “We went to great lengths to plan it. We wanted it to be the ultimate day to remember, especially after such a difficult year for all.”