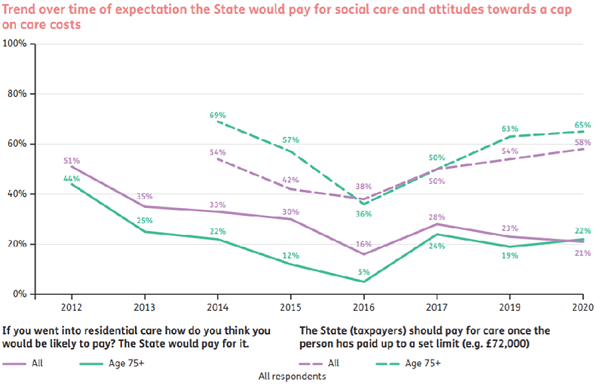 Capping care costs to protect those with the highest care costs is an idea that consistently scores well with the public. Responding to the publication today of the House of Commons Health and Social Care Committee report on Social care: funding and workforce, Stephen Lowe, group communications director at Just Group, said:

“Putting an overall limit on the costs that an individual may have to pay for care before the State steps is an idea that people appear to understand and believe is fair.

“Research for our annual 2020 Care Report found 58% of adults aged 45+ supported the idea of a cap on care costs, while it was higher at 65% among those aged 75+. We have been asking this question since the idea of the cap was proposed in 2011 and it has always been more popular than the idea the State should pick up the whole bill.

“With a cap, the devil is in the detail. If people are expected to pay up to the level of the cap, they need to be clear exactly what spending is included. In that original proposal, spending on so-called ‘hotel costs’ – accommodation and food in a care home, for example – would not be included in the assessment of spending towards the cap.

“There needs to be total transparency around the setting of the level of the cap and what personal spending counts towards it. As we wait to see what the much-delayed government plan is to address the growing issues in the care sector, it seems that the cap on care costs may yet become a reality.”