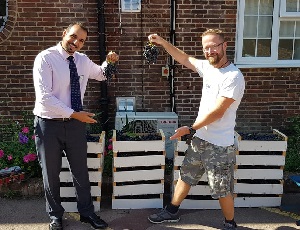 Four colleagues from Bupa Care Services have been awarded the British Empire Medal (BEM), in the Queen’s Birthday Honours List 2000, announced on the evening of Friday 9 October.

They are amongst 450 people to make the list and were selected due to their efforts to keep residents safe and well during the pandemic.

Traditionally announced to mark the Queen’s birthday in June, this year’s list was to recognise those that faced into the battle against COVID-19.

BEM recipients will be presented with their medal by their Lord-Lieutenant at a local ceremony. They will also be invited to attend a Royal Garden Party.

Joan Elliott, Managing Director for Bupa Care Services, said: “This is a phenomenal achievement and I’m utterly delighted to see our colleagues awarded these honours.

“The pandemic has been one of the biggest challenges the social care sector has faced, and all our teams stepped up to keep people safe and well. Ben, Emma-Karin, Adam and Arie are shining examples of this. They’re a credit to Bupa and to society, and we’re all so proud of them.”

Nominated by his colleagues at the home and the Royal Borough of Kensington and Chelsea, Adam manages a prestigious west London care home that cares for 50 residents.

During the pandemic Adam, 49, put on his scrubs and worked alongside his team at the home. For months, this meant working seven days a week, with Adam getting himself a camp bed to stay onsite in case he couldn’t get to and from the home.

Along with ensuring residents continued to receive expert care throughout the pandemic, Adam also made sure they stayed happy and well, hosting champagne breakfasts, barbeques, cookery demonstrations and classical concerts via Zoom.

Speaking of the news, Adam said: “It still doesn’t feel real. I’m so proud for my whole team. Everyone has pulled together during this pandemic, and it’s a reflection of all our hard work.

“I joined the care sector a couple of years ago after working in hospitality. Of course the pandemic has been challenging, but this role gives it a whole new perspective. Everything you do is for the residents – it’s more than work, it’s family.”

Also recognised in the honours list was Emma-Karin. The 27-year-old runs the art department at Bupa Wingham Court in Claygate, Surrey.

The home specialises in rehabilitation and care for adults with complex needs and neurological conditions, such as brain injuries.

Throughout the pandemic, Emma-Karin has used art to ensure that residents stayed engaged and were able to fully express themselves – something that is especially important for those who struggle to communicate verbally.

After plans for the home’s art exhibition were postponed, Emma-Karin set up an independent website to showcase residents’ work, whilst also helping convert pieces into professionally printed greeting cards to help keep in touch with friends and families.

In addition, she has introduced residents to filmmaking to help them share messages that are important to them – including the importance of inclusion, and the dangers of substance abuse.

She even arranged for pop star Bradley McIntosh from S Club 7, to introduce one of the videos – showcasing the fun the home was having during lockdown – which has since had 35,000 views.

As well as focusing on colleagues, Emma-Karin organised a staff art competition to lift spirits, exhibiting their artwork alongside that of residents in an exhibition at the home.

Speaking of the Honours List, Emma-Karin said: “It’s such a lovely surprise. I’m very fortunate to do something I love, using art to make a difference to people’s lives.

“I’m pleased that this highlights the importance of art in care homes. Art makes such a difference to people’s wellbeing, especially in times of uncertainty as it can make them feel reassured and give them a voice.”

“It was hard for families not to be able to see their loved ones. But we’ve had some brilliant feedback, with people saying they felt much better after seeing how much fun we’ve been having!”

“I couldn’t do it without such an amazing team, I really am so grateful to them.”

As a Resident Experience Manager, 39-year-old Arie is typically focused on ensuring the residents enjoy every minute of their time at Bupa’s Arbrook House in Surrey.

During the pandemic, Arie stepped up to undertake a huge variety of roles, constantly learning to help colleagues and residents alike.

As well as training to deliver personal care for residents, Arie also drove colleagues in and out of work, and set up areas within the home for those who needed or wanted to sleep at the home between shifts, thereby minimising the risk of infection using public transport.

Thanks to his commitment – upskilling both himself and those around him – the care home didn’t need to call on additional external support, again minimising the risk of infection, and ensuring residents were cared for by the same familiar faces they knew and trusted.

His focus on residents’ needs never wavered and he’s made sure they were entertained and engaged throughout.

In addition to ensuring a steady flow of live entertainment for our residents, Arie helped them take up winemaking, encouraging them to grow and press their own grapes to make their first ‘Arbrook House vintage’.

Arie commented: “There’s no such thing as a normal day in care, and 2020 has proved that! But at the same time it’s proven what a strong team we are.

“I absolutely love my job and making residents smile every day, so have never really thought anything more of it. To be named in the Queen’s Honours List is very surreal. I’m immensely proud – people in the care sector work so hard, and I’m glad it’s being recognised.”

As well as receiving regular praise from residents, relatives and colleagues, Arie played an important role in securing the home’s ‘Outstanding’ rating from its regulator – putting it within the top 4% of care homes in England.

Ben, 50, has been recognised in the honours list, following high praise from his colleagues, relatives of residents and Hertfordshire County Council.

Based in Borehamwood, Bupa Hill House cares for around 70 older people. Knowing the importance of their relationships with family and friends, Ben was quick to ensure that residents stayed connected.

He encouraged his team to prioritise and facilitate regular video calls from families, to create a support network for residents, and providing much needed reassurance for their loved ones.

Similarly, mindful that residents were not able to go out of the home and entertainers were not able to come in, Ben ensured the home put on new activities to keep spirits up, for example, creating a new gardening project, which has seen residents grow their own herbs and vegetables.

As well as going above and beyond for residents, Ben supported colleagues across the home – providing support, reassurance and encouragement.

He ensured each and every team member was recognised and organised personalised cards and treats to say thank you for their work.

Speaking of being recognised on the honours list, Ben said: “This award has come as a complete shock. Now that it’s sinking in though, I’m incredibly proud.

“I want to say a massive thank you to my team for the hard work and dedication they have shown over the last few months – this award is a recognition of all of us and everything we’ve achieved together.”