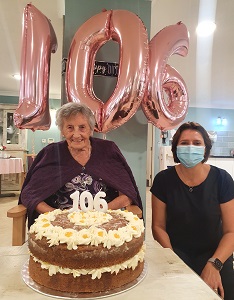 A Braintree great, great grandmother celebrated her 106th birthday in style, with singing, a special cake and stories about her childhood in north Essex.

Margaret Cottis, who is the oldest resident at The New Deanery in Bocking, was delighted with the celebration laid on by the care home, which included Finance Director and accomplished singer Jo Moore performing Margaret’s favourite songs.

Jo Whitehouse, Activities Manager at The New Deanery, said: “Margaret is an amazing woman who has lived life to the full and continues to do so. She is bright, articulate and still young at heart.”

Margaret was born in Lindsell, near Dunmow, in 1914 as the fourth of five children. She moved to Copford at the age of two and was raised by her mother after her father was killed in World War I.

Margaret trained to become a nanny under a Norland nurse when she was 16 and worked for seven years until she met her husband and had her two children. She developed a passion for handicrafts and cross-stitching and loved swimming so much that she only stopped when she was 90 when she could no longer find anyone to take her.

When she was 101, Margaret was invited to Windsor Chapel on Maundy Thursday to meet the Queen. She moved to The New Deanery in 2019.

Jo said: “Reaching 106 is a real achievement and we feel privileged to take care of Margaret. Our ‘singing director’ Jo Moore learned ‘You raise me up’ by Catherine Jenkins and some songs from the musicals especially, and Matron made her favourite Lemon Drizzle cake to celebrate.”

Margaret said: “It’s worth being 106, the day was so wonderful. I’m so grateful, I don’t know how to thank everybody! Good health to all.”