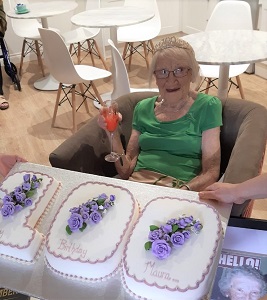 Maura Knight, a resident at Gracewell of Edgbaston, has celebrated her 100th birthday.

Marking this special occasion, Maura’s family joined her in the reception of the care home to see her open presents and cards while they sang happy birthday. Her family also enjoyed champagne and cakes with Maura – from a safe distance looking into her bedroom window. To make this day even more memorable, her grand-daughter composed a song for Maura which was then sung by her family.

The team at Gracewell of Edgbaston were also sure to indulge Maura by giving her a personalised flute to drink champagne from while wearing a ‘100th Birthday’ tiara. Maura, who is a keen fan of the Royal Family, was also gifted a fitting Royal Family tea set which she said made her feel like the Queen for the day. She was also wished a happy birthday by Buckingham Palace after Gracewell of Edgbaston wrote a letter to the Queen notifying her of Maura’s special birthday.

The home also surprised her with balloons and cards from fellow residents and team members who then joined her for a socially distanced afternoon tea party at the home. Maura thoroughly enjoyed the party and made the most of the day by dancing to John Denver’s Country Road. The wonderful celebrations were followed by numerous calls to her family, of which she has three sons, four grandchildren and eight great-grandchildren.

Asked what her advice is for living to 100 years old, Maura said that she made it her life purpose to give care and affection to others, which she succeeded at by previously working as a nurse. She also said she has never had a cigarette or driven a car, which has surely helped. And, although she may have celebrated her 100th birthday, Maura says she still feels like she is 21.

Speaking of her birthday celebration, Maura said that she had the best time celebrating in style and that she was overwhelmed by the love and attention to detail both team members and her family gave to her.

Inverness couple married for 60 years are fools in love