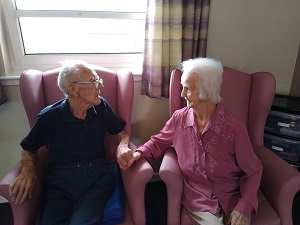 Two residents at Kingsgate care home, East Kilbride, have been treated to a special performance of Auld Lang Syne, the Eddi Reader version, by their granddaughter Suzie Beyor from her home in Upstate New York.

Suzie wanted to send her grandparents, David and Anne Taylor, 93 and 91 respectively, a recording of her singing to let them know she was thinking of them during the current pandemic. Organised by Billy McLoughlin, home administrator, and Kathleen Crymble, activities coordinator, the home was sent the recording which was then played in the lounge for all to hear.

Suzie moved from Scotland to New York in 2016 to live with her American husband after being in a long distance relationship for five years, and she likes to keep in touch with her grandparents as often as she can.

David and Anne have been married for almost 70 years and have three children together. David was an electrician for British Rail and Anne was a tailor and dress maker.

David said: “It was great to hear Suzie’s lovely singing voice and thank you to Billy and Kathleen for helping to set it up. Technology really helps to keep people connected, which makes her being so far away that little bit easier.”

Anne said: “I’m so proud of Suzie for pursuing her dreams and moving to New York, but we miss her greatly. I loved the clip of her singing, and I was proud to tell the other residents that she is our granddaughter!”

Donna Davidson, home manager at Kingsgate Care Home, said: “Suzie has a wonderful singing voice, and thanks to the powers of technology, we were able to share it with David and Anne. It was a very emotional moment for all of us.

“They really enjoyed listening to the wonderful recording, as did many other residents who heard her singing.”