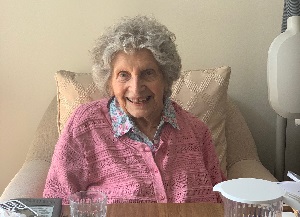 As we celebrate the 75th anniversary of the Allied Victory in Europe, Joan Johnson, a resident at Gracewell of Bookham, has shared her experience of the Second World War.

In 1943, Joan was just 18 when she volunteered with the Auxiliary Territorial Service.

Her first posting was in Scotland where she spent six weeks at an assessment centre, training for her service. She recalls how the cold journey took 14 hours due to bombings on the tracks, with just a sandwich to keep her going. After arriving at 2 AM, she was given four injections and sent to a hut with blankets.

After passing her training, Joan was posted to Camberley driving centre, the same centre where the Queen did her training. It was here that Joan learnt to drive a huge variety of vehicles of all shapes and sizes. As part of her training, she was also taught mechanics and got to know every part of each engine.

Once every month, Joan says she had a “jolly” day. One these days, Joan was sent to collect the new motorbikes in a three-ton lorry at the Mars bar factory which has turned half of its production to building vehicles for the war effort. While loading in the vehicles, Joan was invited into the factory where she was given a bag full of factory-seconds. As you might expect, when Joan returned to camp, she was pounced on for the chocolate.

After 3 nerve racking months, Joan passed her assessments and was excited to get started on her Army career.

She was posted to a camp near Slough which was full of Nissan huts and was close to the forest of Burnham Beeches.

When passing through Slough by train, Joan says that the then Prime Minister, Winston Churchill, apparently saw army vehicles being stored near the railway station and decided they were vulnerable to enemy bombers. He then suggested the Beeches as a suitable place to hide the vehicles and in May 1942 large parts of the site were requisitioned by the war department.

Joan was then a convoy driver and drove all types of vehicles which were mostly from America, including dodge trucks, jeeps and three-ton lorries. Joan even once drove an amphibious DUK vehicle  – she was only five foot four!

Joan’s next job was to take the vehicles to the coast all through 1944 and in the run up to the D Day landings. She remembers the work was difficult, but says she knew she was actively helping the war effort which made it worth-while.

She would get up at 6am to transport the vehicles and then brought back to camp in lorry. Along with twenty other fellow service-women, Joan would sit on the wooden benches in the back of the lorry singing all the way back to camp.

When the news that the D Day Landings had been a success, Joan says everyone was overjoyed.  They were told that they could all have the day off but must return to camp the next morning as their work was not yet finished.

To make the most of the historic occasion, Joan and three others jumped on a train headed to London to go to Buckingham Palace – “now we were really going to celebrate” she thought.

As she had gone to London in her uniform, her and her fellow-servicewomen were greeted with people wanting to hug and kiss them. Joan remembers the place was crammed with people and that you could hardly move; people were cuddling one another, singing and dancing. She says the crowd even did the conga, saying “it was crazy but great fun.”

In the early hours of the morning, the group made their way back to camp.

Her convoy work continued until she was asked to be a staff driver; she remembers how delighted she was and ended up driving the big brass hats around in a Humber Snipe car.

On one accusation, Joan had to leave the camp at 5am to pick up a Lieutenant Colonel and drive him 250 miles to Yorkshire in time for lunch, then drive him home afterwards with only a compass for navigation!

She left the army after three years of service at the end of 1946. After this, Joan decided to take the ‘Civil Service exam for returned warriors’.

After passing the exam, Joan enjoyed a lovely career in the Home Office as a Personal Assistant to one of the Chiefs.  It was whilst working for the Home Office that she met her husband Johnny Johnson who was a Captain in the Army.