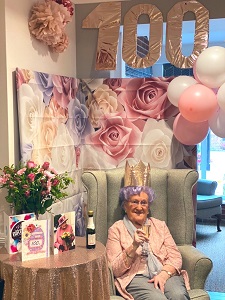 A resident at Sunrise of Bassett, Iris Edwards, has celebrated her 100th birthday.

Despite her birthday celebrations being cancelled due to the current Coronavirus pandemic, the team at Sunrise of Bassett ensured she had the best day.

Iris received dozens of birthday cards and flowers and the home’s talented chefs made her individual cupcakes. Although social distancing measures means visitors cannot visit the home, Sunrise provided Iris with a video-link to her daughter who lives in Texas and couldn’t be with her as planned.

The oldest of three siblings, Iris went to Central School in Southampton and joined the Women’s Royal Air Force (WRAF) in 1939 when she was eighteen. Iris says that joining the WRAF was one of the hardest things she had to do in her life, but says she loved it.

During the War, Iris was based in Exeter and was assigned to Fighter Command as a telephonist and operated the direct line between Winston Churchill and his Generals during the D-Day Landings. 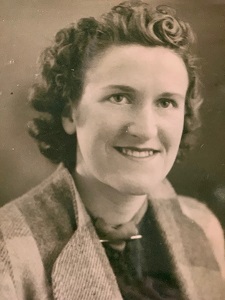 Although she already knew her future husband, Ken Edwards, in Southampton prior to the war, they met coincidentally in Bradford whilst both attending their RAF training – Ken as an RAF Air Gunner and Iris as a telephone “switchboard” operator. After this chance meeting, they kept in touch – Ken was based at RAF Trincomalee in former Ceylon.

When the War finally ended, Iris joined Southampton Police for five years and during this time began her relationship with Ken.

They were married at St. James’s Church, Southampton on 27th March 1952 and had their daughter Lynne in February 1954.

Iris moved to Sunrise of Bassett in 2016, she says she is glad she made the move and is very happy with her decision.

Asked what her secret to looking young is, Iris says she used natural soaps, “Pond’s” face cream and make-up products such as “Coty” and “Number 7” by Boots.

“The coronavirus pandemic meant that we couldn’t celebrate Iris’ birthday quite as planned. However, I’m so grateful to all the team for pulling out all the stops to make this birthday very special for her. It was especially lovely that Iris had the video-link with her daughter Lynne in Texas.

“On behalf of all staff and residents at Sunrise of Bassett, I would like wish Iris a very happy birthday. Iris has had a truly amazing life and we look forward to making more memories with her.”