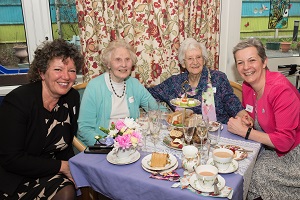 Nurses at The Fremantle Trust were thrilled when Andrea Sutcliffe CBE, Chief Executive and Registrar of the Nursing and Midwifery Council (NMC), turned up at their event at Lewin House in Aylesbury, held to celebrate the Year of the Nurse and Midwife 2020.

Andrea thanked the nurses for the work they do in supporting older people in care homes because nurses don’t just work in the NHS: “It was a privilege and a pleasure to represent the Nursing and Midwifery Council at the Fremantle Trust’s celebration of the International Year of the Nurse and Midwife.

“As I’ve said before, nurses in social care are skilled, compassionate and resourceful.  They play such an important role in caring for and supporting people with a wide range of complex needs. It was great to meet some of the nursing team and see their enthusiasm and commitment.

“It was also very special to talk with some of the Fremantle residents who were nurses and midwives in their working lives. Pam, Connie, Peggy and Jennifer had such interesting stories to tell. They are absolute stars!”

Among the attendees were residents of The Fremantle Trust who used to be nurses. Their stories brought to life the centenary since nurses were first registered in 1919. 89-year-old Peggy Jovanovic, a resident at Icknield Court, Princess Risborough, described how she started nursing in 1952, spending many years running the Burns Unit at Stoke Mandeville Hospital, where she specialised in plastic surgery.

96-year-old Connie Jones, who lives at Sir Aubrey Ward House in Marlowe, began her career at the age of 16 and became a State Registered Nurse in 1940. She described how she was forced to stop nursing when she got married, later returning as an Industrial Nurse, saving one young man from blindness in an industrial accident.

Nurses from all around the Trust and the local NHS attended the event where they enjoyed cake and prosecco. To show how much The Fremantle Trust values its nurses, from April 2020 the organisation will pay the subscription fees of all its permanent nurses to the Nursing and Midwifery Council. Nurse artefacts, kindly loaned from Marlowe Museum, were on display.

Sara Livadeas, CEO of The Fremantle Trust said: “We love our nurses in social care and we couldn’t do our job without them. They work as part of a team looking after people 24/7. This was a great opportunity to bring people together and celebrate the contribution of both care home residents and nurse colleagues from across the Trust.”

The World Health Organisation announced that 2020 would be dedicated to nurses and midwives and chose the theme to coincide with the 200th anniversary of the birth of Florence Nightingale.