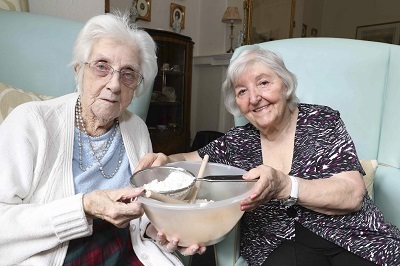 A retired 104-year-old domestic science teacher has been reunited with one of her former pupils at the care home where they now both live.

Great great grandmother Rhiannon Grey Davies and 86-year-old Joyce Jones were “surprised but delighted” when they bumped into each other at Pendine Park’s Gwern Alyn Home in Wrexham.

They first met when Joyce went to Acrefair Secondary School where Rhiannon was a member of staff during the Second World War in 1944 when she taught her pupils how to eke out their families’ sparse food rations.

In the 1960s Rhiannon became a pioneer of Welsh language education.

She was among the first four teachers at Ysgol Morgan Llwyd in Wrexham which was one of the first Welsh-medium comprehensive schools to open in Wales.

Rhiannon was in charge of the school for several months until the permanent headteacher was released from his previous job.

According to Joyce, a great grandmother, her former teacher was “very strict” but always fair.

Now they often sit and chat to reminisce about their old school days.

Joyce moved into Gwern Alyn with her husband, Raymond, in February of this year while Rhiannon moved into the care home at the end of June.

As soon as she heard the name Rhiannon Grey Davies, she knew it could only be her former teacher.

She said: “It might have been 1944 but I can remember the classroom at Acrefair Secondary School like it was yesterday.

“Rhiannon was an excellent teacher but very strict. We had corporal punishment then but I was always a good girl and never had a ruler struck across my knuckles like some did.

“Domestic science wasn’t just about learning to cook. Then it was about preparing girls to be good housewives and how to run a home for their husbands.

“We even had to learn how to wash up properly and how to sweep the floor remembering to always brush toward the fire hearth. Everything then was so different. “

Joyce, who married her husband, Raymond, in 1951 when she was 18, added: “Rhiannon has been a bit of a recurring theme in my life. She lived with her husband very near to Raymond’s parents in Garth, near Llangollen for a long time so I used to see her there.

“We sit and chat and sometimes have dinner together. There can’t be many teachers living in a care home along with one of their former pupils.

“She must have taught thousands upon thousands of pupils over the years. She was formidable and demanded respect.”

Rhiannon was born in 1915 the daughter of Presbyterian Minister John Foulkes Ellis and Lizzie Jane Foulkes Ellis in Gwyddelwern, near Corwen, but moved to Glan Conwy aged four.

She attended college in Cardiff in 1933 and completed a two-year course to become a domestic science teacher.

She said: “I enjoyed teaching. In the war, I did some classes for housewives to help people make the most of their rations. It’s what we did. I was also a First Aid volunteer but we weren’t called out too often.

“Domestic science was all about teaching girls how to run a house, cooking, cleaning and everything else. We didn’t have so many gadgets then.

“I only taught girls but at Ysgol Morgan Llwyd I did teach a few boys in my own time. My own son went to college and didn’t know how to cook basic food so I thought it would be a good idea to teach boys some basics so they could look after themselves.”

Rhiannon’s daughter Bethan, 69, says her mum married Elwyn Grey Davies in 1942 and they had two children, her brother John, who was born in 1949 and herself.

She said: “Dad passed away in 2000. He was an organiser for the Royal Society for the Prevention of Accidents (ROSPA) and before that worked at the Co-op in Rhosemedre.

“When mum moved to the Wrexham area she worked for just one term at Ruabon Secondary School before moving to Acrefair Secondary School. Then, when she moved to Ysgol Morgan Llwyd as it was opening, she was in charge for a term.

“They had four teachers but had to wait for the head to be released from his contract in Caernarfon so he could move schools.”

Bethan, who herself was a teacher and deputy head at Ysgol Glyn Ceiriog, says her mum has two granddaughters, aged 40 and 37, through her brother and four great-grandchildren aged between two and six.

She said: “Mum has been in excellent health all her life and in truth has never been in hospital or really had to see a doctor very often. That was the issue really. When she fell ill aged 103 for probably the first time we had to turn to the NHS.

“Everyone was fantastic from the nurses to the doctors. Everyone was amazing. I found a place available here at Gwern Alyn and she moved into the home in June.

“It’s a lovely home and the carers are amazing. Its home from home and she has really settled in well. It was also a lovely surprise discovering that one of mum’s former pupils was also a resident here.

“Mum remains fiercely independent and doesn’t like to be helped if she can do things herself. You don’t argue with her!”

Joyce says she had three daughters with her husband, Raymond, who passed away in February very shortly after they moved into Gwen Alyn.

“My daughter Carol emigrated to Australia many years ago and lives in Melbourne. I do get to see them every couple of years.”

She added: “I’m settled in Gwern Alyn. The staff are wonderful and it is like home from home. I enjoy talking to Rhiannon although it must be quite unusual to have a teacher and pupil living in the same care home.”

Gwern Alyn activities co-ordinator Yvonne Moran says in 30 years working in the care sector she has never known a former teacher and one of her pupils to both residents of the same care home.

She said: “It’s wonderful. Both Rhiannon and Joyce are amazing and very well thought of by everyone, staff and residents at Gwern Alyn.

“When I heard we had a lady moving win who was nearly 104 I was amazed. However, not as amazed as when I first saw and spoke to Rhiannon.

“She remains very independent and is still has a formidable presence about her. She has an air of authority even now.

“There is no doubt that women and men who lived through the war years are somehow strong and have a real determination about them.

“It’s lovely seeing both ladies chatting and reminiscing about school days and their old school.”