A dedicated dementia care home in Poole buzzed with the sounds of children and laughter as it hosted an *award-winning intergenerational project.

Colten Care’s The Aldbury in Ringwood Road welcomed Truth Be Told, a Dorset-based project run through the Gateway Church in Poole, which seeks to bridge the gap between generations by joining young children and their parents with residents of care homes, for storytelling and ‘family’ time.

Truth Be Told’s founder, Gemma Gillard said: “I’ve been blown away by the response from so many local families who are keen to be involved with Truth Be Told.

“Every day of every life is valuable, whether you’re 9 weeks old or 90 and it is joyous to see residents’ dignity and sense of purpose restored as they interact with little ones and chat to their parents.”

Toddlers, babies and their parents and carers spent a morning singing, chatting and enjoying the company of some of The Aldbury’s residents. 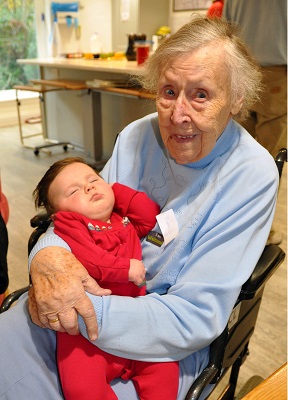 Keith said: “The children are so open and full of life. They haven’t been shy about getting involved – or getting us involved too. It’s been great fun.”

Diana agreed: “I’ve enjoyed every minute of it and can’t wait to see all the children and their lovely parents again.”

Resident and former nurse Beryl Goodhew enjoyed the chance to spend time with one of the tiniest visitors.

She said: “I have held hundreds of babies over the years, but this is the first time I have cuddled a sleeping infant in a very long time. I’m happy as I could possibly be.”

Rebecca Milton attended the session with her son Charlie, 16 months.

She said: “I heard about Truth Be Told through my mum and thought it sounded like a lovely idea – and I’m so glad we came.

“Charlie has spent the morning with a wonderful group of older people, making them smile and clearly enjoying their company. It will be great to watch him getting to know them all in the coming weeks.”

After the session young and old enjoyed a picnic lunch together.

Truth Be Told sessions have also taken place at Colten Care’s Newstone House in Sturminster Newton and there is an ongoing group running at its Abbey View home in Sherborne.

A further seven sessions will now take place at The Aldbury in the run up to Christmas.

The Aldbury’s manager Kim Harding said: “Truth Be Told is a wonderful project and one which we are incredibly excited to be involved with.

“Within minutes of meeting each other the residents, children and parents started to respond to each other, helping each other put on their name badges, chatting, asking questions, swapping and sharing tiny props and generally enjoying each other’s company.

“I think Truth Be Told will have a meaningful effect on everyone it touches.”

Truth Be Told is run through Gateway Church in Poole whose members have been developing and growing the project.

Richard Stamp, a leader at the church, said, “The challenges faced by the NHS are well-documented and projects like Truth Be Told show that churches can be part of the solution, improving the health and wellbeing of everyone in their communities.

“We have one of the oldest populations in the UK and with approximately 160 care homes in our conurbation alone, it is an enormous social need.

“We would love to see a Truth Be Told group in each one of these homes, extending the invitation for everyone to belong.”