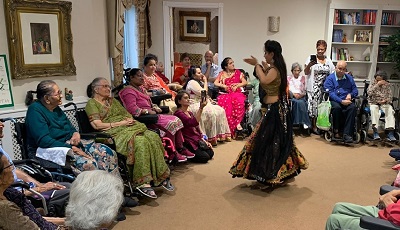 Residents, relatives and team members at Karuna Manor care home in Harrow celebrated the biggest Hindu festival of Diwali, known as the Festival of Light, with music, fireworks and dancing.

Celebrating festivals like Diwali enables residents, particularly those with dementia, to feel connected with their heritage and culture. Mr Shah, a resident at Karuna Manor, described the annual party as “being back at home with our family.”

In a poignant moment, the local community joined in with the festivities as they attended prayers with the resident in the home’s onsite Temple.

The Diwali festival came to a close as the Karuna Manor team gifted residents with beautiful shawls (which are similar to scarfs) as Diwali gifts as a token of appreciation and respect.

“Diwali is such an important day for our residents as many live away from their families and these festivities provide the opportunity to bring the local Hindu community together and celebrate the culture.

“It was great to see everyone get involved in the dancing and everyone thoroughly enjoyed the occasion.”

Karuna Manor is run by TLC Care, a care home group which is committed to delivering care across its homes in a safe, compassionate and responsive way with residents specific and individual needs, preferences and desires at the core.