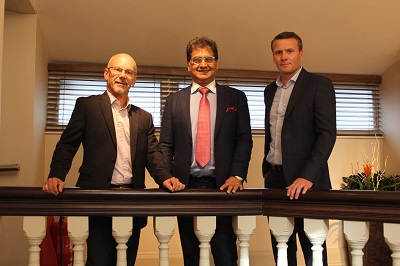 ONE of the North East’s leading hospitality and care businesses has announced the appointment of a new Group Finance Director.

Andrew McColl will join the main board of Newcastle-based Malhotra Group plc when he takes up his position with the company in November.

And his appointment follows current Group Finance Director Martin Greenwood’s decision to retire in March 2020 after five years with the group.
Andrew joins from Teesside-based housing association Thirteen Housing Group, where he held the post of Director of Finance (Treasury & Investment).

He started his career in banking as a graduate at Northern Rock before leaving to join Natwest and RBS, initially as Relationship Manager in business banking before moving up to Portfolio Director in the corporate banking division.

He left RBS to work for HMC Group as Financial Analyst before progressing to Group Finance Director as he qualified as an accountant with ACCA.
At Thirteen Housing Group he was responsible for a team of 40 across treasury, development, tax, legal and income services, leading them through a transformational reshape, managing the £360m loan book and leading the acquisition of a North East housing contractor business.

Martin, whose 44-year financial sector career started with Williams & Glyn’s Bank in Leeds and encompassed senior roles with RBS – latterly as director for RBS Corporate Banking and, ultimately, regional director, healthcare for Yorkshire and North East – will remain with Malhotra Group plc in a non-executive capacity.

He will now work with Andrew over the coming months to ensure a smooth transition.

“I have known Andrew personally since 2008 when I was able to entice him across from Northern Rock to join my North East relationship team at RBS,” said Martin, “and he is joining the board at a very exciting time as a number of current key strategic and landmark developments are coming towards conclusion, whilst many others are also due to commence.

“As I embark on the next stage of my career with the group, I wish Andrew every success in his new role, which I am confident he will execute superbly.”
“Martin’s are big shoes to fill,” said Andrew, “but I am very much looking forward to working with the Malhotra family and the group for many years to come as they continue on their remarkable journey.”