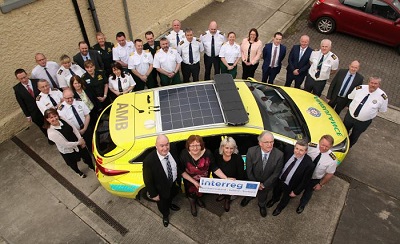 A pilot project providing medical help for vulnerable people in rural Scotland and Ireland been shortlisted for a prestigious European award.

The Scottish Ambulance Service and Glasgow Caledonian University have been instrumental in the Community Paramedic Project – a cross-border initiative designed to reduce the number of people who visit A&E departments.

And now the innovative project – supported by EU funding – has been recognised by a prestigious Europe-wide awards scheme called RegioStars 2019.

Shortlisted, against competing projects from across all 28 member states, the community paramedic project has made it through as a finalist in the ‘Modernising Health Services’ category.

The project is managed by the CAWT cross-border Health and Social Care Partnership and is now competing against four other EU funded projects in the same category. Additionally, the project is in with a chance of winning the Public Choice Award which will be decided by public vote.

Citizens across Europe can vote online for their favourite project on the Commission’s RegioStars 2019 website[1], until voting closes at midnight on 9 September and can be accessed HERE. The winners of these awards will be announced, during the 2019 EU week of Cities and Regions, at a special ceremony held in Brussels on 9 October.

The pilot project is a collaboration between the Scottish Ambulance Service, the National Ambulance Service in Ireland and the Northern Ireland Ambulance Service and is funded for a 36-month period through the EU’s INTERREG VA Programme, managed by the Special EU Programmes Body (SEUPB), which is urging people to go online and use their vote.

The project provides specialist training to ambulance staff so that more patients can be assessed and treated at home or in their community.

Delivered on a cross-border basis, this pilot project is training existing paramedics based in Western Scotland, Northern Ireland and Ireland to become Community Paramedics. This specialised training has been developed in partnership with Glasgow Caledonian University.

The project allows patients to be treated either in their own home, or in the community, without the need to travel long distances to the nearest hospital where they could potentially experience long waiting times before being treated.

To date, this has proved extremely beneficial for vulnerable older patients living in isolated, rural areas, across all three regions. It has also helped to free up time, resources and much-needed bed space amongst a number of hospital A&E, Emergency Department and Acute Medical Assessment Units.

At present the project is being piloted in the Mid Argyll area of Western Scotland, Buncrana in County Donegal; Clones in County Monaghan; and Castlederg in County Tyrone.

In addition to providing Community Paramedic training, the EU funding is being used to invest in new rapid response vehicles for the pilot areas in the ambulance regions. These vehicles are also fitted out with the specialist equipment needed to provide care to patients in their homes or their community.

Welcoming news of the projects nomination Gina McIntyre, CEO of the Special EU Programmes Body, said: “We were delighted to hear that this excellent project had been recognised at a European level. It is one of a number of INTERREG VA funded initiatives that are implementing smart, effective cross-border solutions to health and social care issues that affect many thousands of citizens living in the border region.

“The project is delivering on pioneering work, and in so doing is also helping alleviate some of the pressures faced by our hospital emergency services, as well as providing much-needed healthcare to some of the most vulnerable and isolated members of society within their homes. I wish it the very best of luck for the final awards ceremony in October, and would encourage everyone in the region to vote and show their support,” she continued.

According to Bernie McCrory, Chief Officer of CAWT: “This project, involving ambulance services from the three regions working together, is enhancing the health and social care of citizens living in more rural and isolated areas and is enabling the transition from traditional institution-based service provision to a more community-based approach. The valuable EU funding investment provided by the SEUPB is supporting the health services to implement joint cross-border solutions to issues that affect citizens living in the border region.”