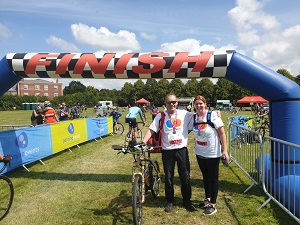 Paul Gilmore, deputy manager of Rivacre House in Ellesmere Port, Cheshire, and support worker Lisa Lee took part in Liverpool to Chester Bike Ride. The pair cycled 25 miles, including a stretch through the Queensway Tunnel under the Mersey, which is cleared of motor vehicles for the annual event.

Keen cyclist Paul had previously completed the non-competitive ride to raise money for Claire House, a Merseyside children’s hospice, but for Lisa, it was her first time on a bicycle  – and one that she had borrowed – in six years.

The money raised will be used to fund a total transformation of the garden at  the home, which is operated by adult health and social care charity Making Space. It provides long term residential care for people for mental health conditions and learning disabilities. Upgrades will include a water feature, new garden furniture and a herb garden.

Paul said: “We have been overwhelmed by the response to our fundraising and aim to have the garden works completed by September.

“Me and Lisa cycled the 25 miles side by side and it was definitely a tough day for her, being her first time on a bike in six years!

“We both very much enjoyed a post-ride pint.”

Lisa said: “If it wasn’t for Paul’s encouragement, I fear I might have given up. My lack of training definitely showed, but the support we got was amazing