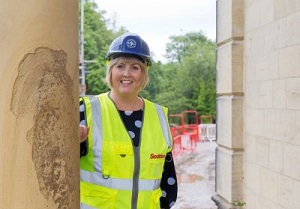 Enhanced Community Healthcare Options (ECHO) is announcing the appointment of an award-winning care home professional to lead the team at its new specialist care facility, Malsis Hall, in Glusburn near Keighley

Lisa Gardner brings with her more than 30 years’ experience in the care sector, having qualified as a Nurse in the 1990s and working her way up to hold a number of senior managerial positions.

She has won several national awards for her work, including the Service Manager Award in 2014 and the Family Carer Choice Award in 2016, which was voted for by Service Users and their families.

Lisa’s career has primarily been based in the North East and Cumbria and has focused on providing care for vulnerable people who have complex and multiple needs. She has previously had significant successes in supporting people with mental health conditions to return to independent living.

Malsis Hall is currently being converted into a care centre designed to provide recovery and rehabilitation for people with mental health conditions, often resulting from psychological trauma. The service, which will be accepting referrals from Local Authorities and the NHS within a 30-mile radius, is due to open in two phases in early summer and autumn.

The facility will also include three sports pitches, a sports pavilion and community meeting rooms for members of the public to use.

Lisa Gardner said: “I’m delighted to have been appointed as manager at Malsis Hall. It’s a wonderful building with a lot of history, and it’s fantastic to see ECHO bringing it back to life. It’s going to be a beautiful, therapeutic environment for our residents, and the new residents are going to love the facilities and the grounds.

“It is essential when someone is recovering from a mental health condition that they can do so in a calming atmosphere with plenty of access to the community for support. Not only is Malsis Hall close enough to the village that our residents will enjoy visiting regularly, but the facilities, such as the sports pitches, will draw the local people to see us too.”

Andrew Shelton Murray, Director of ECHO, said: “Lisa is an exceptional Nurse and a well-respected, experienced leader. Her track record and the recognition she has received, both from peers and members of the public, speaks for itself.

“Malsis Hall is going to be a fantastic facility for the whole community, providing local services and jobs for local people, and we needed the right person in place to ensure it is the success it deserves to be. There is no doubt in my mind that Lisa is the ideal candidate.”