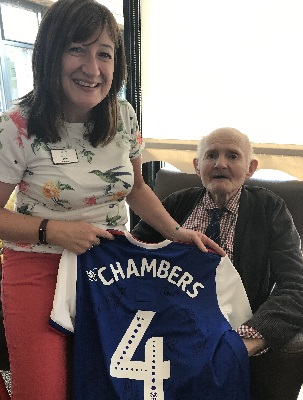 A lifelong supporter of Ipswich Town Football Club, David Crisp, was in for a real surprise when he was presented with a very special personal gift from his favourite football team; a signed match day shirt worn by team captain, Luke Chambers.

David, originally from Needham Market and an avid supporter of Ipswich Town Football Club all of his life, moved to Hillcroft House residential care home in Stowmarket in July last year.

It was at the home that he met Julie Smith, who works as an administrator, and when Julie heard about David’s love of Ipswich Town, she contacted her friend and neighbour Carl Collins, who happens to be Head Chef and Catering Operations Manager at the club.

Explains Julie: “When Carl heard about David, he and Ipswich’s kit-man, James Pullen, arranged for the Captain’s match-worn shirt to be signed by the entire Ipswich team, and presented to David.”

Carl, helped by his two children, presented the shirt to Julie, who in turn was delighted to pass it on to David, who was quite overwhelmed by the gift. Added Julie: “As someone who listens to every Ipswich match on the radio and reads all of the match reports in the local newspaper, David was absolutely thrilled to receive the shirt. He will absolutely treasure that shirt, I’m sure.

“I’d like to extend a huge thank you to Carl and James for helping to arrange the surprise for David, and to the whole Ipswich team for their kind and generous gesture.”

Added Jon Hammond, manager of Hillcroft House: “I would like to say a special thank you to Julie, whose caring, thoughtful and kind nature initiated this wonderful idea. She is a great example of how taking an interest in residents’ hobbies is just as important to someone’s well-being as is the physical care they may need – it really makes a difference to our residents and I would like to personally thank you for going the extra mile!”