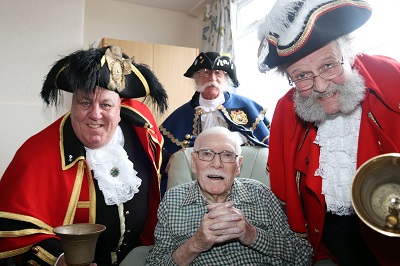 Oyez, oyez, oyez, – three North Yorkshire town criers were part of a VIP celebration in honour of one of their own at a Scarborough nursing home.

Alan is a resident at Saint Cecilia’s Nursing Home in Scarborough and he was also joined there by former councillor and past mayor Tom Fox and his wife Ros, as well as other representatives from Scarborough Borough Council and Scarborough Hospitality Association as well as friends.

Nursing home owner Mike Padgham said: “Alan is a lovely man and we are delighted that his fellow town criers and friends were able to join us for a get-together.

“Alan is well known as a former Scarborough town crier and it is lovely that all the great work he did in that role was celebrated in this way.”
Alan, who is an MBE, was Scarborough’s town crier for 31 years, a role that took him all over the world. He was national champion in 1988, 1989 and 1994 and European champion from 1990 to 1992.

During the afternoon, the three town criers each made a proclamation in Alan’s honour, including best wishes from other town criers, including one from Australia. He was also presented with a framed photo of himself in action as town crier during an Armed Forces Day.