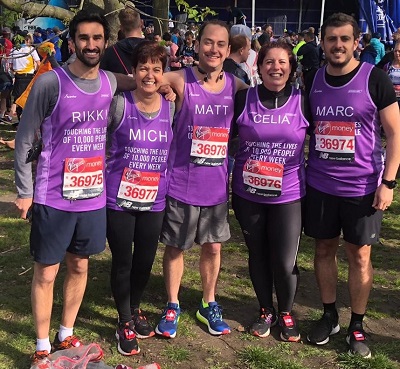 This year, five Jewish Care runners completed the Virgin Money London Marathon on Sunday 28 April. They raised £20,000 to help the charity to support older people in the community, touching the lives of 10,000 people each week.

The Team Jewish Care runners had close connections with the charity and three runners were running their second marathon. It was Rabbi Celia Surget’s second marathon for the organisation in two weeks, having already run the Paris Marathon at the beginning of April.

Michele Lobl family have a long standing, close connection with the charity. When her father, Benjamin Morgenstern, was diagnosed with dementia, the Social Work and Community Support team were there for Norma, Michele’s mother and the family. Benjamin stayed at the Jewish Care’s home in Hendon for respite care, and sadly passed away in 2002.

Now, 17 years later, Michele’s mum, Norma, who is 92, is a resident at Jewish Care’s Lady Sarah Cohen House. After initially staying at Ruben’s House for respite care she was diagnosed with rapid onset Alzheimer’s disease in December last year. Norma very recently underwent surgery to remove a tumour and has moved back to the Friern Barnet care home to receive nursing and palliative care.

Michele says, “Norma has always been a feisty, stoic and independent lady, loving her cooking, baking and voluntary work. Mummy taught us the value of supporting others.

“Now with our own family crisis it seemed the least I could do to try and raise additional funding to support Norma/mummy and so many families, who like us have Jewish Care to thank for supporting their loved ones at their most vulnerable times in their lives and ensure care and dignity at the end of their lives.”

“For me it wasn’t about the time but crossing the line!! Every pound sponsored means a lot to me and kept me moving forwards through each mile in the knowledge that families in a similar situation to ours will benefit.”
“I was very emotional at the finish and I’m just so pleased, the support was amazing from Jewish Care and I’d like to thank everyone who supported me by sponsoring me to raise money for the organisation.”
The Running Rabbi, Rabbi Celia Surget, Associate Rabbi at Radlett Reform Synagogue, completed two marathons in two weeks for Jewish Care this year, Paris and London. Rabbi Celia also serves as Governor for Clore Shalom Day school and sits on the executive board for the Assembly of Reform Rabbis and Cantors, the Reform movement’s rabbinic and cantorial body.

She said, “I am proud and excited to have run for such an inspiring charity. Having had this experience, I feel like I’m part of the Jewish Care family and it’s such a privilege. It was so inspiring to see the team cheering squad at Mile 11 and knowing I’ll see them at Mile 23 was so motivating too, helping me to reach the finish.”
“I’d like to thank the community for their support, the money I’ve raised might just help one person, but it will help to make a real difference to their life.”
Rikki Lewis, 32, who lives in Willesden Green, grew up in Edgware and ran the Royal Parks Half Marathon for Jewish Care in October also has a strong personal connection to the Friern Barnet care home. After the marathon, he said, “The feeling of pain and body destruction has been pushed aside by an enormous sense of pride and achievement. It was an absolute privilege taking part in the race and I am extremely proud having raised money for the fantastic charity Jewish Care, which undoubtedly pushed me over the finish line.”

“I really wanted to raise money for Jewish Care as it’s focused on the local community I grew up in. I have had relatives and close family friends that have been residents at Jewish Care’s Lady Sarah Cohen home and have elected for my fundraising to go towards the operation of the care home. It is extremely comforting knowing first-hand what impact my fundraising will have.”
Marc Cohen, is 34 and also feels very close to the charity he is supporting. He lives in Chigwell and works in the family property business, he says, “Our team of Jewish Care runners were great. I did really well for the first half and then coming up to Tower Bridge I’d pulled a muscle and was struggling second half. The crowd was amazing and seeing the Jewish Care cheering team at Mile 23 was a big help. It was well worth the pain and all the support from the crowd, and from people donating to
Jewish Care and the fantastic support from the charity’s team throughout training and on the day, really kept me going.”

“I grew up in Essex and was a regular at Redbridge Jewish Community Centre as a teenager. Whilst I was there I could see how Jewish Care looked after older people in Essex. My Dad helped with the Meals on Wheels service and I know how the Jewish Care team also work with older members of the community to live independently with support.
“Having been at RJCC and a pupil at King Solomon High School, it was important to me to run for a Jewish charity. My wife, Nicole, has been amazing at supporting me all the way as have our children, Theo, 2 and Amelia, 4, has been fantastic.”

Matt Capin, 40, from Borehamwood, will also be running for Jewish Care, “It was an amazing experience no other race compares to the London Marathon, I enjoyed every second of it, and it was incredible to be running for such a great organisation. I was so happy to see the Jewish Care support team and my wife, family and friends supporting me. I knew about the great quality of Jewish Care homes, so I wanted to support them by running for the charity. My Grandpa and family friends were residents in a Jewish Care home so I’m really pleased to be able to run for the organisation which does such a lot for our community.

“This is my second marathon and I’ve done a seven half-marathons but this was just incredible. From Mile 1, I was high-fiving everyone but thought I’d better get on with running after that. I would say if there’s one race to do the London Marathon is the most amazing experience.”

Adam Overlander-Kaye, Jewish Care’s Director of Fundraising & Community Engagement said, “I’d like to say a huge congratulations to all of our runners for taking on this tough challenge. It was a great atmosphere I enjoyed cheering them. Each runner has their own inspiring story about what motivated them to take on this huge challenge in support of Jewish Care. If you feel inspired and would like to join Team Jewish Care to do a Marathon or another challenge event please do get in contact, we would love to hear from you”.