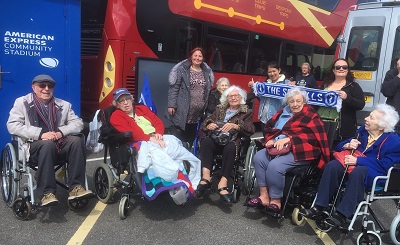 Six care home residents, supported by staff and family members, were delighted to be able to see their local team, Brighton & Hove Albion, play in the final weekend of the Premier League 2018/19 season yesterday thanks to Chairman of the club, Tony Bloom, who invited them to the Amex Stadium to come and see a match.

Resident of Jewish Care’s Hyman Fine House, Jenny Goldberg, who has always lived in the Brighton area was delighted to go and support her local team. Fellow resident and football fan, Alan Bass, 85, (far left in group photo), has supported his local team for 55 years and moved to Jewish Care’s Hyman Fine House in March 2017. Having grown up in London, he is also a fervent Arsenal supporter and as a young supporter, when he couldn’t go to see his team play away, he’d always go to another London game instead.
After the match, Alan said, “It was a really special day as I didn’t think that I’d ever be able to go and see another football game together with my son, Paul. In fact, all three of my boys are big Brighton fans. It was also incredible to see the trophy presentation, even if it wasn’t for the right team, I’d never seen that before in all my years as a fan.” 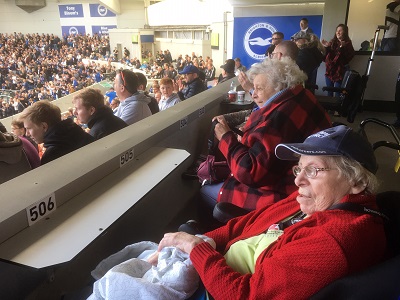 Home Manager, Natasha Carson, added, “When I called to organise the game I tried to pick the latest match in the season to ensure we’d have good weather and we couldn’t have been luckier. We were in spacious wheelchair area with great view, it was just amazing that we got to see this match.

“Quite a few of the residents and staff had never been to a match before so it was very exciting seeing a premiership trophy awarded, even if wasn’t to Brighton! It was a great experience and the residents were very appreciative. We definitely gained a few new fans and would like to say a huge thank you to Tony Bloom for inviting us along and to The Bloom Foundation for their continued support of Hyman Fine.”