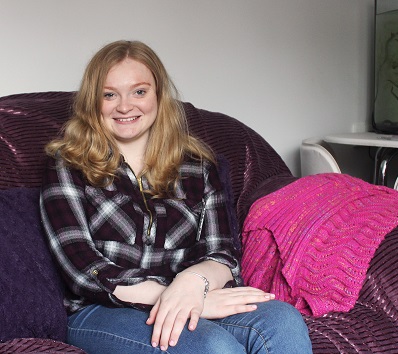 Thanks in part to the support of staff at Hightown Housing Association, a supported housing resident has secured a part time job at Heirs and Graces Day Nursery in Tring working as a Teaching Assistant.

Mimi is a wheelchair user and lives at one of Hightown’s supported housing schemes in Tring for people with physical and learning disabilities, as well as mental health issues. Having only ever lived with her family, Mimi decided to move to the scheme to gain more independence. Mimi has her own self-contained flat with a kitchen, bedroom, bathroom and living room. Each resident has a personalised support plan to help reach their full potential, build confidence and make decisions regarding their life.

During her time looking for local volunteering opportunities, Mimi found that some buildings had limited accessibility for wheelchair users. As a result, she was in some cases unable to progress past an initial meeting. Heirs and Graces Nursery is fully accessible. They have recently renovated their entrance, including an access ramp and hand rails.

Mimi said about Heirs and Graces:

“They were really open minded and friendly. Some of the schools I contacted offered me one hour time slots to simply read a book to the children as they had limited expectations of what I could do. When I met with Holly who works at Heirs and Graces she brought out my confidence and made me feel that they would give me a role that would challenge me and use my qualifications.”

Mimi has qualifications in English, Maths and Children’s Development. Instead of offering Mimi a volunteer role, the staff at Heirs and Graces were so impressed that they offered her a paid position working two days a week. She will be helping children aged 2 – 3 years old. Mimi had support from staff at the scheme when first making contact with local schools and nurseries.

“The staff are friendly and chatty and always on hand to help if needed. They supported me in my search for a volunteering role by asking local nurseries and schools and getting contacts for me to meet with. To be offered a paid job out of it was a lovely surprise!”

Joan Taylor, Mimi’s Link Worker, spoke of the progress Mimi has shown since moving into the scheme:

“Mimi has developed a lot since moving here. She came from her family home with Mum and Dad, to her own flat which she has decorated and accessorised herself. Mimi makes her own decisions now and has grown in confidence. She’s a lovely, bubbly girl, who is capable of so much. We are over the moon that Heirs and Graces have recognised that and given her this opportunity!”

Mimi started her new job on Monday 15th April. We wish her the best of luck!