Twenty Colten Care homes in the South supported the 2018 appeal, collecting more than £5,000 through events such as a Strictly Come Tea Dancing competition, a pyjama walkathon, a teddy bear picnic and a car wash. There were also coffee mornings, bingo competitions, ‘spotty’ mufti days, raffles and quizzes.

In return, residents from two Colten homes in Lymington, Belmore Lodge and Court Lodge, enjoyed a day out at the BBC’s Southampton studios.

The first treat was to sit in the producers’ area watching a BBC Radio Solent interview by presenter Alex Dyke with Martin Roberts of the TV property auction show Homes Under the Hammer.

The party then went into the BBC South TV studios to be greeted and shown round by presenters Anjana Gadgil and Tony Husband along with Children in Need mascot Pudsey.

Belmore Lodge resident Janette Banks said: “Many of us are familiar with Homes Under the Hammer and so it was a joy to see the piece with presenter Martin Roberts. Going into the TV studios was a real thrill too and we took the chance to sit on the guest couch where all the interviews are done. The BBC team were delighted to hear about our fundraising.” 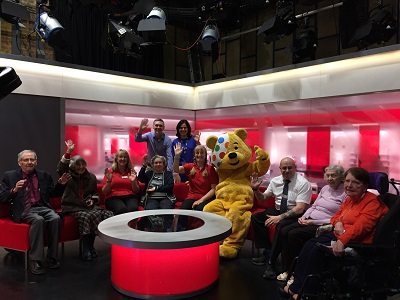 Colten Care has a deliberate policy of linking companionship and activities programmes at its homes with fundraising for charities chosen by residents.

Sheeja Lolamony, Home Manager at Court Lodge, said: “Helping others is central to our community ethos and is a great way to provide social opportunities for our residents. The studio tour was the icing on the cake. We’re so grateful to everyone at the BBC who hosted the visit.”

The 2018 BBC Children in Need appeal raised more than £50.5 million nationally. The money goes towards helping disadvantaged children and young people across the UK.