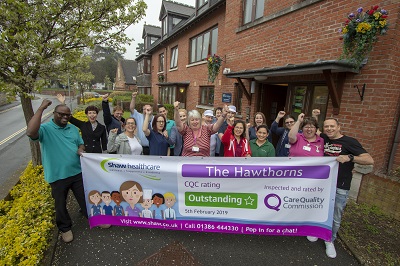 A Worcestershire care home that supports almost 50 people with dementia or acquired brain injuries has been praised for delivering an “extremely well-led and caring service” in a recent report by inspectors from the Care Quality Commission (CQC).

The Hawthorns care home in Evesham has received a much sought-after ‘outstanding’ rating by the CQC, the highest grade awarded by the independent regulator.

As part of their report, inspectors said: “The atmosphere within the service was exceedingly friendly, comfortable, inviting and open. Positive and innovative ways to support people had been and were continuously being developed.”

They also added that there is a “high level of training [of staff]” and that the home’s staff placed residents and relatives “at the heart of the service”.
The commendation comes just months after the home’s manager, Mary Tasker, received the University of Worcester’s Hennell Award, which recognised her contribution towards providing person-centred dementia care, leading to a positive impact on residents, their families and the local community as a whole.

In 2017, the Hawthorns was recognised for leading the way in dementia care after introducing a piece of technology known as a ‘magic table’. The table uses interactive games to connect people in the mid to late stages of dementia with each other, and with their surroundings, all the while stimulating movement.

The following year, one of the nurses working at the Hawthorns, Louisa Bayliss, was so inspired by her experiences that she wrote a song called ‘Love me as I am’, which touched on the difficulty of living with dementia and how relatives and carers are affected by it. Ms Bayliss subsequently recorded the song with a musician friend and it gets played regularly at The Hawthorns, as well as other Shaw homes across the UK.

Ms Tasker said: “I can’t express how proud we are to have received this commendation from the CQC. The report is a culmination of all of the hard work our team has put in to make the Hawthorns a standard-bearer in dementia care.

“Without the diligent work of our staff, this recommendation would never have happened, so I’d like to thank each and every one of our team for what they have achieved.”

Mike Smith, operations director at Shaw healthcare, added: “CQC inspections act as an independent benchmark of the quality of management and care provided in a residential home, so receiving an outstanding grade is a major achievement and a vote of confidence for everyone who works at the Hawthorns.