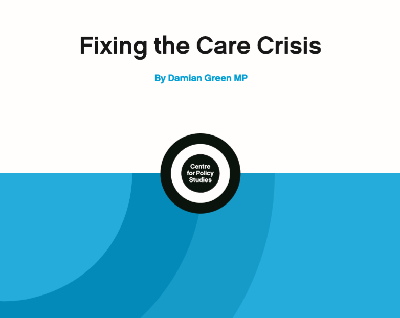 Social care is one of the most controversial topics in British politics – but one that urgently needs to be addressed.

In a new report for the Centre for Policy Studies, the Rt Hon Damian Green MP – who as First Secretary of State commissioned the Government’s social care green paper – puts forward a bold and comprehensive proposal to secure the future of social care.

‘Fixing the Care Crisis’ argues that the current system is financially and politically unsustainable, opaque, unfair, and actively discourages local councils from investing in social care and housing for older people.

With the number of over-75s set to double from the current level of 5.3 million in the next 40 years, the need to address this problem is – as the King’s Fund warned only days ago – moving from urgent to critical.

The paper sets out that any reform of social care needs to:
• Provide sufficient funding to plug the gap created by an ageing population
• Be fair across generations and between individuals, ensuring that no one is forced to sell their own home and ending the ‘dementia lottery’
• Increase the supply of care beds and the provision of retirement housing
• Secure public and cross-party consensus
It argues that the care system should adopt the model of the state pension – with the Government providing enough support for a decent standard of care via a new Universal Care Entitlement, while encouraging and incentivising people to top up this provision from their savings or housing wealth via a Care Supplement.

The result of this is a sustainable system likely to be supported both in Westminster and beyond – not least because it protects councils from the soaring costs of care. It also fixes the warped incentives introduced by the reforms of the 1990s, which by handing councils responsibility for care costs led to new care home provision stagnating.

‘Fixing the Care Crisis’ demonstrates that the Care Supplement will be affordable and attractive to millions of those reaching retirement age, ensuring a steady flow of private wealth into the care home system.

It also suggests a range of methods to fill the immediate funding gap in the social care system, estimated at approximately £2.75 billion. These include, in decreasing order of preference:
• Taxing the winter fuel allowance
• Diverting savings from the Spending Review
• Potentially imposing a 1% National Insurance surcharge on those over 50

“The crisis in our social care system is one of the most pressing issues our country currently faces. It causes acute problems for the wider NHS, with 1.98 million delayed transfers in 2017/18 for those moving out of NHS care. The Conservative Party has an urgent need to show that it has ideas about vital domestic policy issues such as this.

“That why I propose a wholesale change in our approach to social care, mirroring the state pension system with the introduction of a Universal Care Entitlement and Care Supplement.

“By combining this new system with an increase in funding we will be able to tackle this most intractable of political dilemmas fairly and responsibly.”

Robert Colvile, Director of the Centre for Policy Studies, said:

“Social care has been an intractable issue because it is so hard to come up with a system that is fair to everyone. But Damian’s proposals would pass all the key tests – the system would be sustainable, there would be protection against the ‘dementia lottery’, no one would have to sell their own homes, everyone would have access a decent level of essential care, and those who paid in more would get access to extras such as bigger rooms or more frequent excursions.

“This issue has been politically toxic, but we need a solution that commands consensus. I urge politicians from all parties to consider these proposals extremely carefully.”

Dr Amanda Thompsell, Chair of the Faculty of Old Age Psychiatry at the Royal College of Psychiatrists, said:

“..This report draws attention to the obvious and inconvenient truth that the current arrangements for social care are as well as being opaque and unfair (in particular for older people with dementia or indeed any long-term mental illness) are financially unsustainable.

“…this report should be studied by anyone who cares about older people, and all those who expects themselves one day to become old.”

“This report confirms the massive role that specially-designed retirement housing has to play in helping reduce people’s reliance on social care as they get older and the extent to which Government at a national and local level needs to increase the supply and mix of housing available for older people.

“It correctly identifies the need for local housing targets specifically to serve the needs of older people and in calling for a new use-class for retirement housing this landmark report sets out how we can start to equip our housing stock for an ageing population.”

“Social care is in crisis letting down thousands of older people every day. It is scandalous that older people and their families have to sell their homes, drain their savings or go into debt just to get vital care and support. This report reiterates the need for urgent action by the government, who have dithered and delayed for over two years, pushing many older people into crisis. One thing that is clear from this report, and the growing consensus is, that a care cap will not work.

“The proposed Universal Care Entitlement would need to be at a high enough level for older people to enable them to live well, not just enough to get by. This should mean as a minimum all older people having access to free personal care, an entitlement that is already available in Scotland and has proven to be popular, affordable and sustainable. It must also address the unmet care needs of the 1 million older people missing out on support as they are not eligible, according to criteria set out by government. If we are asking the public to pay more through taxation, they need to know they will get access to the care they need.

“The difficulty with splitting care between an entitlement and a supplement is that it runs the risk of a two-tier system. It is hard to predict our future care needs, and with 2 million older people living in poverty, it is crucial their care costs are fully protected too.”

Natasha Curry, Deputy Director of Policy at the Nuffield Trust, said:
“This paper takes on the right question in trying to address a social care system that is failing vulnerable people. But it doesn’t fully answer it. The system it proposes does move to a national solution on funding and help that is given out based on need, not means. These are exactly the kind of changes we have been calling for [2] and that have been put off for far too long, most recently with the delayed Green Paper.

“However, the funding provisions here would only bring in an estimated £2.75bn, which falls far short of what would be needed even to keep the current inadequate systems going. It is difficult to see how this could guarantee a care offer for all that is of a decent standard. That would leave people to rely on the proposal for private top ups. As well as being potentially unfair, we have never seen a private insurance market for social care really materialise, despite policymakers trying to encourage one on several occasions. It’s not clear that the mechanisms here to make it easier to pay would really make a difference this time.”

Paul Morgan, Managing Director of Audley Group, said: “The population is growing older, which continues to negatively impact the social care system. More people need help, and budgets are squeezed meaning fewer can access it – and this crisis point has been coming for a long time. Building the right care network takes time and consideration, so that the root causes are actually addressed. And one significant cause is housing. Living in the wrong type of property, that isn’t adapted to your changing needs as you age,  can increase the need for both health and social care. When it comes to the older generation in particular, we need to focus investment on a more stable, long-term solution and recognise the value of quality retirement property. If social care and housing were considered in the round, we could actually create holistic solutions which take the pressure off this creaking system.”