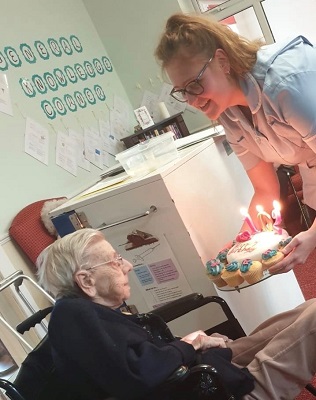 A party was held at Longmoor Lodge Care Home, on Longmoor Lane, Sandiacre.

She received cards, flowers and a homemade birthday cake as well as eight cupcakes decorated to spell her name.

After the birthday bash, she said: “I feel good about reaching 102 years young.”

Born in April 1917 in Long Eaton, Kathleen lived on Cranmer Street, before meeting her future husband at her aunt’s wedding, where she was a bridesmaid.

From the age of 14, she worked as a clerk, rising to chief wage clerk by the time she married James Frederick William Cattermole in April 1947, at Ilkeston Registry Office.

During World War 2, she received training on how to put out fires with stirrup pumps, spending her evenings fire watching.

She said: “We had training but never had to put any fires out. We also had two soldiers billeted with us during the War. Everyone had to do their bit.”

Kathleen has always been a keen dancer and used to tour the Nottingham clubs, ballroom and sequence dancing.

She was also a pianist and performed alongside her brother, Harold Mason, who played the violin. She said: “He used to tap me on the head with his bow if I ever went wrong.”

She has two children, daughter Zena and son Cliff, as well as five grandchildren and five great grandchildren, who visited the home for her party.

“She enjoyed a lovely party with her family on Saturday and today staff have given her some flowers.

“Everyone has thoroughly enjoyed celebrating Kathleen’s milestone birthday with her and she has had a lovely time seeing family and friends.”