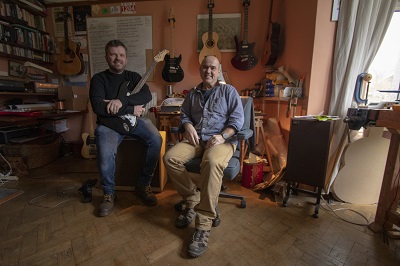 Staff at a specialist nursing and care home in Tredegar decided to reach out to the owners of a local guitar workshop in order to create a very special experience for one of their residents.

The team at Maes-y-Dderwen wanted to create a memorable experience for Richard Carradice, 36, one of their residents who moved into the home about four years ago. Richard has a passion for guitars and spends every other Saturday travelling into Cardiff, where he likes to browse around his favourite music shop. His bedroom at the 24-bed residential and respite care facility has also recently had a design make-over, and now features stencils of his favourite guitars on the walls.

Richard was given an experience he won’t forget when he was taken to meet Paul Best and Paul Dunn – two former teachers who set up their own guitar workshop just outside Caerphilly in 2013. Radioshop Pickups already supplies customers around the world, shipping out custom-made products to customers in Italy, Norway, Denmark, the US and South America. A ‘pickup’ is the component inside an electric guitar that acts as a microphone, transferring the sound made by the guitar’s strings to an amplifier.

Products supplied by the duo – both accomplished guitarists in their own right – have attracted praise from around the globe and they list Chris Buck of Buck and Evans (winner of Total Guitar Best Young Guitarist in the World 2017 and from Abercarn) as one of their satisfied customers. The pair, soon to appear on the pages of leading guitar magazine Guitarist, got the call from Shaw healthcare and were only too pleased to help out. 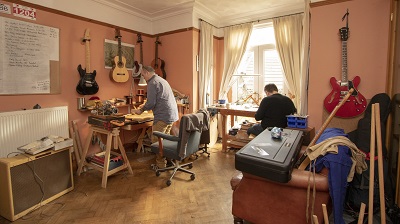 Paul Best commented: “It was an absolute pleasure for us to welcome Richard to the workshop and to show him the unique way in which we make our guitar pickups. It was wonderful to share in his enthusiasm for the guitar at the end of the tour with a jam between us and also to see his reaction to the improvement in tone from his guitar after installing the pickups. We hope they help give him years of enjoyment from his guitar!”
Richard, who is originally from the Abergavenny area, was told about the visit a few weeks ago and, according to staff, he has talked about little else since.

“Richard just loves guitars and everything about them,” explains Mark Reynish, who works for Shaw healthcare as an occupational therapist. “Although he isn’t confident about playing in front of others, you can hear him practising in his room and he listens to music on his iPod every day, which also works as an important relaxation technique for him.

“He was nervous about going along because he doesn’t really like meeting new people, but the experience was incredible for him and he took so much out of the day. We are so thankful to the two Pauls for their kindness and support.”

Nick Stevens, manager at Maes-y-Dderwen, added: “Richard’s really come out of his shell and his confidence has increased tenfold since arriving with us. This treat that has been organised for him would never have been an option when he first came to live here but it’s pleasure to see how he has responded and flourished through his interaction with our staff.”

Maes-y-Dderwen helps to rehabilitate those with mental health issues and is run by Shaw healthcare. As well as developing friendships in the home, staff encourage residents to establish and maintain close links with their relatives, friends and the local community.