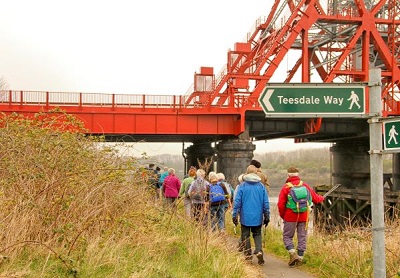 Energetic walking enthusiasts at Middleton Hall Retirement Village are limbering up to head out on the first of a series of walks planned for 2019.

The outings are overseen by Margaret and Tony Dalby, an intrepid couple who journeyed all over the world before settling at The Waterside development at the award-winning Middleton Hall at Middleton St George, near Darlington.

The couple, whose expeditions have included walking to the Everest base camp in Tibet and tackling the Inca trail in Peru, are now putting their experience to good use and creating adventures closer to home for their neighbours and friends by running a monthly walking group.

After moving into their Waterside home in 2014 the couple, who once took their caravan up to the Arctic Circle, soon found themselves appointed as the organisers of regular walking excursions.

Four years later, Tony, 81, a former Chairman of Yarm Ramblers and Margaret, 85, have taken groups on scores of walking trips across the north east region.

“Shortly after we moved in we went out walking with one of our neighbours and the next thing I knew I was told I was organising a walking group for Middleton Hall Retirement Village,” Tony explained.

“It’s gone from strength to strength since then and we now have almost 30 people on our list and a very nice group to walk with. I get a lot of pleasure from organising the outings.”

Margaret added: “We walk about four miles and it’s always very sociable. It’s more of a walking-talking group and we thoroughly enjoy being part of it.”

After leading the first few walks Tony invited others to suggest and lead routes and there are now a number of other leaders willing to lead various walks in a number of different locations.

“We try to keep it local as we don’t want to spend hours driving to the starting location so we’ve done walks near Hurworth and Middleton One Row as well as slightly further afield in Richmond and Teesdale,” Tony added.

As well as assisting Tony on the monthly walking excursions, Margaret also organised a memorable summer coach outing for their Middleton Hall neighbours to Malham and Malhamdale last summer.

“My main aim was to get us all to the Wensleydale Creamery in time for a cup of tea but we had to make a detour via Grassington because of a land slip and at one point the coach had to follow sheep being herded along the road. It was an eventful trip and everybody was laughing but we made it in time for tea. We all still laugh about it now.” 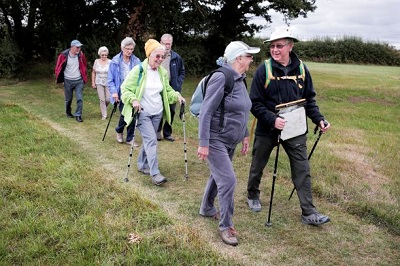 The couple have devised a series of new walks across the Tees Valley and County Durham for 2019 as well as an outing to Alnwick Gardens in the summer.

Both Tony and Margaret also take part in a range of other activities on offer at Middleton Hall including an art group, singing class, aqua fit classes in the on-site gym and regular coffee mornings with their Waterside neighbours.

“We’re never in,” joked Margaret. “We also go out a lot to events in the area and to meet up with friends and family.”

Many of Margaret and Tony’s fellow walking companions are neighbours of theirs in Middleton Hall Retirement Village’s Waterside development of carbon neutral homes, where the couple relocated to from Worsall, near Yarm, from a bungalow they had designed and built.

“It was a fabulous home in a wonderful rural location and Tony was not convinced about moving but I was worried about how isolated it was as time went by,” said Margaret.

“We happened to come to Middleton Hall for lunch and saw The Waterside show home. Afterwards we both said it was somewhere we could see ourselves living and here we are now. We have a lovely home that looks out onto green spaces, we love organising the walks and have kept our active and busy life, so we are very happy here.”

Pam Mooney, Middleton Hall’s Operations Director, said: “It’s great to see over the past three years the walking group go from strength to strength.
“Although we must thank Margaret and Tony personally for their work in setting up and co-ordinating the walking group, it is a fine testimony to all our residents who continue through a range of activities, social events and groups to develop a vibrant, friendly and active community for all to enjoy.”