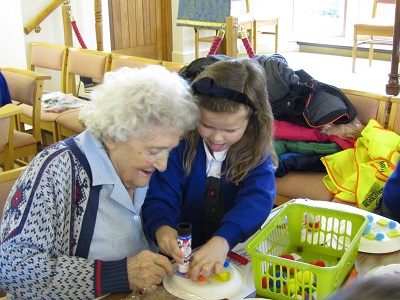 The ” Book End Project” has been launched at St. Christopher’s Care Home in Abington Park Crescent, Northampton, a joint venture between the Home and Northampton’s Bridgewater Primary & Nursery Schools.

“The Book End Project”, aims to bring together people at both ends of the age spectrum where both are dependent on each other.

Week One began with the making of name tags and the children introduced a ‘Hello’ song which they will teach the residents. At the end the children sang a ‘Goodbye’ song. An element of playing a game or reading a book together also took place.

Week Two sees one of the residents with a birthday, so there will be a party and a few games. Week Three will be a music week with songs and actions. Week Four will be more physical activity orientated, taking place if possible, outside. The Final week for this group of adults and children will include an Easter Egg Hunt.

One of the Bridgewater School children, Pearse, after the name tag activity said, “I felt nervous at first because I thought it was going to be so big. I’ve met Edna today, she’s nearly 100 years old. I like helping people”.

Keith, aged 89, who used to teach 8 year olds, met first with Sophia, “She seems like a very nice child” he said. 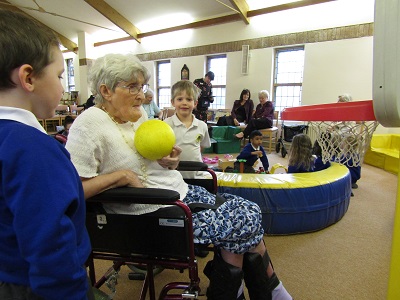 During the games part of the afternoon, Pearse, Sam and Betty who is 94, and suffered a stroke which means she is now in a wheelchair and only has reduced use of her left arm, played mini-basketball together. Sam was heard quite spontaneously to say, ” Go on Betty, I believe in you, you can do it”. She netted the basket several times and resulted in the whole room erupting into cheers and applause from residents, carers, teachers and children alike.

The Project will be evaluated for both groups from beginning to end. Sarah Clarke, Manager of St. Christopher’s said, there will be 3 stages of evaluation for the St. Christopher’s residents, initially, midway and on completion. With those who are able, there will be a questionnaire and we will evaluate how their answers change over the five week period. For those who can’t fill in a questionnaire, it will be by observation by myself and one of my deputies”.

It is quite likely the “Book End Project” will be on-going with another set of 10 children and residents over a further five week period.