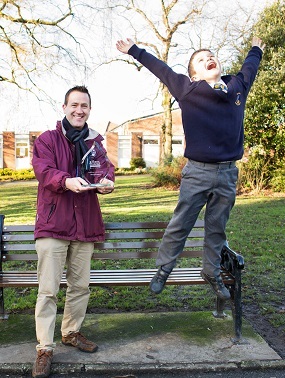 When Mike Bradbury was awarded the accolade of Home Instead Senior Care’s CAREGiver of the year, his son Thomas (9) was so proud that he told classmates he wants to be a carer when he grows up, just like his dad.

Mike (45), from Marple Bridge in Stockport, was awarded the prestigious title of Home Instead Senior Care’s CAREGiver of the Year in an emotional ceremony at Home Instead’s recent national conference. The home care franchise company employs over 9,000 staff and Mike was honoured as the year’s number one for going above and beyond to provide friendship, as well as personalised support, to elderly clients in his community.

Not only does his son Thomas now want to be a carer, he also gave a presentation to his class that described his dad as the best carer in Europe, upgrading him to an international title!

Mike who, along with wife Sarah, also has three daughters, began his career as a joiner. After realising that the role left him unfulfilled, three years ago he took the bold step of reinventing himself as a carer. Of his career change Mike said, “Many people ‘of a certain age’ choose to stick with the path they’re on, even when they’re not happy, but I knew that helping other people would help me just as much. I took the leap and joined Home Instead. Now I give a lot of myself but in return my clients inspire me and I look forward to every day.

“To have been honoured with this award is the cherry on the cake. To be honoured again by my son Thomas, well that’s an extra cherry on top of that! While other nine-year-olds might aspire to be firemen, astronauts, or pop stars, he’s looked at me and decided he wants to be a carer. I can’t begin to describe how good it feels to know he is proud of me and that he aspires to help others as well.”

Mike was put forward for the CAREGiver of the Year award by Paul Vickers, owner of the Home Instead High Peak office, which employs him. Paul said, “Mike is a genuine and special kind of carer. When he came to Home Instead, his only experience was of caring for his own parents but he wanted to make a difference to the lives of others in his local community. He took to the role like a duck to water and has proved to be an outstanding friend and a carer to all of his clients.”

Mike is known for meticulously researching the needs and preferences of his clients, so that he can do things just the way they like them. When one elderly gentleman expressed that he preferred a wet shave to an electric razor, Mike bought the equipment and practiced on himself until he was good enough to give his client the shave he wanted. He’s learned other new skills as well, including cooking a fantastic fish and parsley sauce and painting with watercolours, all so that he can help his clients continue to share the things they enjoy.

Home Instead carer spend a minimum of an hour with each client and this policy has enabled Mike to develop real friendships with the people he supports.

One lady with dementia went from struggling to click with anyone to greeting Mike with a hug every time she sees him. She even began to recognise her husband from old photographs and told Mike that she wished he’d got to meet him. Mike takes another client with dementia to Werneth Low, because the view helps him to reminisce about the routes he used to take, in his younger days, when he was a keen cyclist.

Paul continued, “His cool head and compassionate nature make Mike a truly inspirational individual. Not only does he support his clients to the highest standards, he also takes time to support new CAREGivers when they begin caring for clients. His communication is faultless and I’m really proud, though not at all surprised, to see him win this prestigious award.”