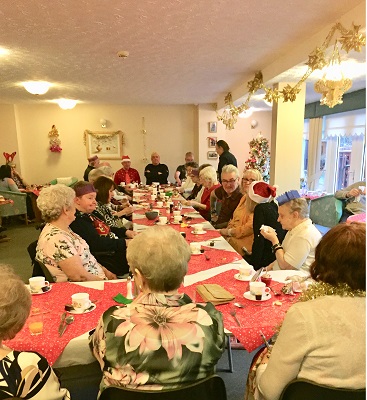 OLDER people at a Port Glasgow retirement housing development got into Christmas spirit as they celebrated the festive season with a double whammy of events.

Tenants at Bield’s Crosshill Gardens development tucked into a staggering 52 Christmas dinners as part of their annual Christmas party on Wednesday 12th December.

Guests and tenants were served a three-course feast comprising soup or juice for starters, turkey or steak pie for the main and gateaux or trifle for dessert.

Complete with token gifts and a visit from Santa Claus himself, those involved enjoyed music from community warden, Mark Lynch, who gave his own rendition of Christmas classics as well as Robbie Williams’ ‘Angels’.
Michele McKinnon, Retirement Housing Manager at Crosshill Gardens, said: “It was such a fantastic day – I can’t believe we managed to serve up 52 Christmas dinners! 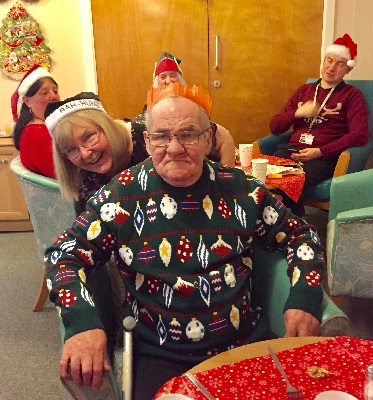 “Mark’s version of ‘Angels’ was quite moving, and we even managed to have a boogie with the community police officer.
“On behalf of everyone at Crosshill Gardens, I would like to say a big thank you to the members of the community who helped fundraise for the event and the volunteers who lent a hand on the day.

“At this time of year it is important to be able to spend time together. Thanks to their hard work, none of our tenants were lonely this Christmas.”
Adding to the festive fun, tenants will also be treated to a visit from the Port Glasgow High School band for the third year in a row on Friday 21st December.

A treats table will be supplied on the day for the pupils as a thank you, with 88-year-old tenant Margaret Sneddon creating 30 individual Chocolate Orange knitted hats which she has worked on for the last four months.

Margaret said: “It did take a good few months to get all of the knitted hats ready for the 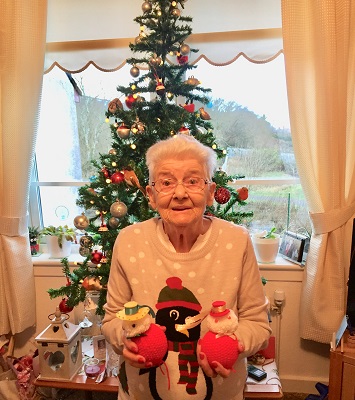 children, but it is so worthwhile when you see the smiles on their faces. It is Christmas, after all.”

Crosshill Gardens in Port Glasgow is a Bield development for those aged 60 and over who want to be able to retain their independence while having help on hand when needed.