A former art student who discovered a talent for chainsaw sculpture has created a magnificent menagerie of woodland creatures.

The collection of giant squirrels, owls and hawks carved by Paul Morris now adorn the grounds of the Pendine Park Care Organisation in the leafy suburbs of Wrexham.

Paul, 55, who is a skilled member of Pendine’s gardening and maintenance team, wanted to add colour to the rolling 11-acres at their site in Summerhill Road and give the residents something extra to enjoy.

He is currently working on one of his most ambitious projects yet as he carves out a grizzly bear at the personal request of proprietor Mario Kreft MBE.

Paul discovered he had chainsaw carving skills quite by accident after deciding to have a go at making an garden owl for his wife’s birthday.
He said: ‘My wife has lots of porcelain owls that she’s collected over the years. And with her birthday coming up I decided to have a go at carving one using my chainsaw.

“I managed it, although it was quite a simple design, it was just a case of thinking about it and tackling the job methodically. IT must have been a half decent job as my wife, Gaynor, loved it.

“Since that first design I’ve gone on to perfect my technique a fair bit and done all sorts of different designs from squirrels to owls and hawks to field mice. I really enjoy it and it’s very therapeutic. I completely self taught to be honest. 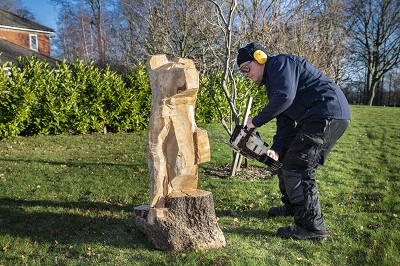 Paul who worked as a woodsman at at the National Trust’s Erddig Hall in Wrexham for many years says he uses any storm damaged trees as material for his Pendine Park designs.

He said: “We lost one tree to a storm and it had to be chopped down so I asked our head gardener, Andrew Jones, if he could leave me about six foot of the stump. I then designed an owl and used my chainsaw to complete the sculpture.

“I think it’s nice for the residents to have something different to look at especially when we are using our own damaged trees for the designs. I know Andrew and Mario Kreft are keen to add to the gardens and want to make the gardens even more appealing to residents and visitors.

“The squirrel I designed was made out of a section of ash. We had to cut the tree down as it became infected with a disease but I managed to save a big piece of unaffected tree and used that for the sculpture.

“It’s almost like trees get a second chance to inspire even when they have come to the end of their natural life on the Pendine Park estate.”

Paul who is a father of four and a grandfather of four has worked at Pendine Park for 15 months and says, although self-taught, he has always liked art.

He said: “I did go to art college many years ago but wasn’t there long. But I think I’m still a bit arty. I like to sketch out my designs first. I really like doing meerkats to be honest but they perhaps wouldn’t work in the setting at Pendine Park.

“It’s not a long process and I can do a fair sized owl for instanced in a couple of days. Although the bear I’m doing for Mario Kreft will take me maybe four or five days doing a bit a time.”

He said: “Paul does an incredible job and I think residents, staff and visitors get something out of seeing these fantastic works of art dotted around the grounds.

“They look incredibly realistic, even if they are so big, and the fact they are made from the trees that grew in the Pendine Park grounds means something.

“Instead of the wood going to waste it’s been given a second lease of life and can be enjoyed for many years to come.”

It was a sentiment echoed by Mario Kreft who said: “I’m delighted to include these sculptures within the gardens and think they not only blend in naturally but they also add a new element to the overall garden design.

“Ensuring a beautiful environment inside our care homes and externally is extremely important and all our homes are set within substantial well-tended grounds.

“I’m particularly looking forward to seeing the bear when it is finished as it will have a very special meaning for me.

“My late father, Franz Kreft, travelled the world working as a bear and lion trainer and the sculpture will be dedicated to his memory.”