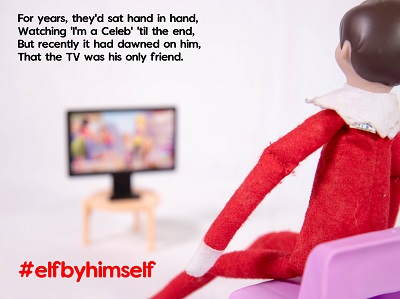 A national live-in care provider has launched a campaign aimed at combatting loneliness this month in honour of their chosen charity, The Silver Line.

Promedica24, which provides dedicated live-in care across many regions of the UK, have released a series of images that show a ‘retired’ elf struggling with life on his own following the death of his wife, each captioned with the hashtag #elfbyhimself, a play on the popular ‘Elf on the Shelf’ craze.

With over half of all 75 year olds living alone in the UK, the campaign hopes to highlight a number of issues that people struggle with when living alone, including cooking for themselves, seeing TV as a companion and being able to open up to family and friends about loneliness. Recent figures found that two fifths of all older people say that their television was their main source of company. It also increases the risk of mortality by 26 % with experts claiming that loneliness is as bad for you as smoking 15 cigarettes a day. 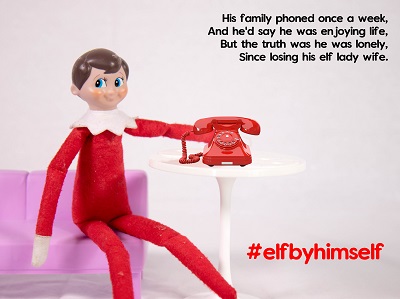 “We know that many people want to stay in their own homes, but without an effective support network, this can be very difficult and often isolating.

Loneliness is something we encounter frequently through the care we provide and often, it is as much companionship as hands on care that people are looking for.

We felt it was important to give a thought to, and help to spread awareness of, all those people who are facing Christmas alone this year.”

In addition to the campaign, one of the company’s regional partners, Gary Derbyshire, has become a Silver Line Telephone Friend and having successfully completed his training, is now helping people in need of someone to talk to.

“Helping to reduce loneliness in communities is one of our visions at Promedica24 and we feel strongly about supporting this very worthwhile charity who share our values.”