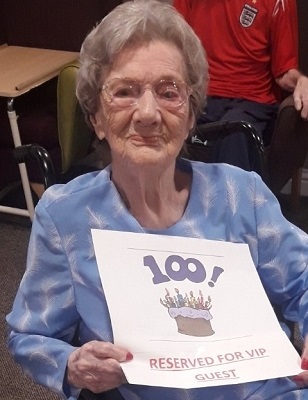 A popular resident at a Shropshire care home has celebrated her 100th birthday.

Flossie Timmins received a special message from the Queen congratulating her on her landmark birthday and was the guest of honour at a party laid on by staff at Myford House Nursing Home in Horsehay, where they put on a day of fun for the centenarian and her friends and family.

Born in Sandwell in 1918, animal-lover Flossie has lived through two world wars, several moon landings and two coronations – with King George V on the throne the day she was born.

Debbie Pugh, care home manager at Myford House, said: “Flossie is such a popular resident here and always gets involved in our activities. She loves to sing, listen to music, and generally wants to keep loving life. She is also our resident balloon tennis champion.

“We wanted to put on a special party for Flossie which also reflected her huge affection for animals.

“With that in mind, we managed to get a zoologist to come in with some meerkats, snakes and hedgehogs and that made for a really wonderful afternoon – helped also with singing, a birthday cake and a special presentation of her card from the Queen.

“We are delighted she had such a fabulous day. It was an honour to be part of something so special.”