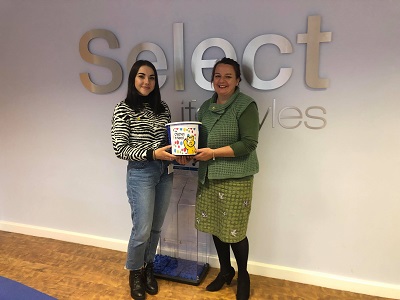 Whenever and wherever possible the dedicated team behind Select Lifestyles make sure that they are always doing their part in helping those in need, by participating in special events and fundraising at all given chances throughout the year.

So, it goes without saying that they wouldn’t miss the opportunity to give a little more and raise some money to go toward this year’s BBC’s Children in Need.

As you are all aware, Children in Need 2018 fell on Friday last week. What better way to motivate all the staff at Select House to get involved and in the ‘giving mood’, than with the promise of a ‘dress down’ Friday?

Of course, they certainly don’t need a reason to fundraise for such a great cause, but it’s always nice to not let their tremendous efforts go unnoticed and without some sort of reward, no matter how small.

After all, the idea is to make it feel like the special occasion that it is, and not just like another day in the office – with just slightly lighter wallets, perhaps!

Everyone participated in the dress down code, and some even treated their co-workers with some Pudsey-inspired attire. The collection box made its final rounds, and the final count is in. Saying it was a success would be an understatement!

Great efforts all around meant that in just one single day, doing something as simple as coming into work in their jeans, the team at Select House were able to (almost) effortlessly raise an astonishing £114.12!

But the giving didn’t stop there. The senior staff recognised the amount of effort that all the employees had put in to do their part for Children in Need 2018. So much so, that they’ve announced that Select Lifestyles is, very kindly, matching all the money raised by the staff last Friday.

Which brings the final count to a total of £228.24, donated by the team at Select Lifestyles for Children in Need 2018.

Not bad for a day’s work!