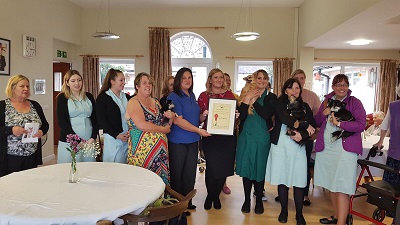 The Old Vicarage – a care home in Dorset –has been rated as the most ‘pet friendly care home of the year’ by a nationwide animal charity for the third time.

The home, which is based in Leigh near Sherborne, is registered with ‘The Cinnamon Trust’, a national charity that works to respect and preserve the treasured relationship between owners and their pets. It was named as winner out of its 650 registered care homes across the country.

Animals are a central part of life at the Old Vicarage. Residents at the home are encouraged to consider bringing their pets to live with them, and once they arrive, pets are as well cared for as the residents themselves. Each person’s pet has their own care plan including their life history, meal preferences and records of vet visits. Volunteers walk dogs for the owners, and based on wishes of residents, the team will look after animals following the owner’s death.

Some of the animals currently enjoying life at the home include Toggles the long-haired dachshund, who belongs to resident Sheila.  Toggles barely leaves her side and Sheila says he ‘brightens her day’ and helps her get up in the morning. Raffles the tabby cat has been at the home since 2006 when he arrived with his owner Ros. Ros sadly passed away, but Raffles has remained at the home where he loves to be cuddled by the residents.

The Cinnamon Trust visits each of its 600+ registered care homes every two years to interview home managers and to observe the animals within the home.  Assessors particularly look for homes which look after pets belonging to residents, rather than only ‘house pets’, and for those who take on the care of pets when residents are unable to do this themselves.  The Old Vicarage has received this award three times. 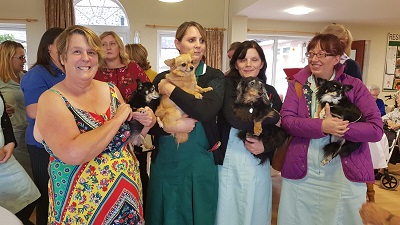 Residents and staff were treated to a special afternoon tea, provided by the charity to celebrate their win.  Home manager Louise Turner said, “We’re absolutely thrilled to have won this very special award.

“Animals have such an important place in our home.  We really see the difference their companionship makes to our residents every day.  They’re like family members and bring so much love and joy to their owners and their friends.

“To us, the Old Vicarage is our residents’ home, not ours, and we want their move here to be smooth and enjoyable.  For some who have lived years of their lives with their pets, it’s absolutely right that they join them, we wouldn’t have it any other way.”

CEO of the Cinnamon Trust, Mrs Averil R. Jarvis MBE said “I am sure that everyone at The Old Vicarage is as proud of this award as the original founder, Annie Sinnott MBE would have been. The Old Vicarage sets the standard when it comes to Pet Friendly Care Homes  – long may it continue, and my sincere congratulations to all concerned, and particularly the manager, Louise Turner.”