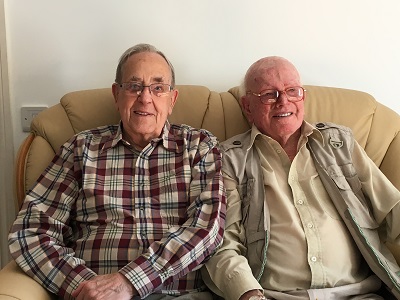 Gracewell of Frome, on Welshmill Lane, has selected two residents to take on the very special role of ‘Resident Ambassadors’ at the home.

Henry Everett, aged 96, and Rowland Prior (Roly), aged 92, moved into the residential care home earlier this year and are now the proud new resident ambassadors.

Although now both living at the Frome care home, the pair had been friends long before they moved in their new home. Henry and Roly were once in the Royal Artillery, and they both married their wives in the year of 1952, with both being called Joyce – so they had a great deal in common.

Henry and Roly had varied and active careers, which included Henry’s work for local newspapers and Roly buying his own news agency. Henry and Roly eventually both ended up in Bournemouth, where they lived in the same street and established firm friendships with each other and their wives, enjoying lots of social occasions together over the years.

Henry and Roly are now very proud to be Gracewell of Frome’s ambassadors. As part of their roles, they will be showing their luxury suites to prospective new residents and their families. They have brought along furniture of their own, making their rooms personal, comfortable and familiar with a real home from home feel. They are also always on hand to speak to prospective residents and their families about what life is like, and the many benefits that living there brings.

The pair have grown to love Frome and all that it has to offer, including preparation of their favourite meals from the home’s award-winning chef Simon Lewis and his team, and taking their mobility scooters independently into town to go shopping and visit their much-loved pub, “The George” for a meal and a pint. Throughout the summer, they have enjoyed the home’s sensory garden and events like the Beach Party, BBQ, and music and dance entertainment.

“I am proud to be an ambassador for Gracewell of Frome and happy to share what an amazing home it is with prospective residents by answering their questions and sharing my very positive experience here.

My sister has even recently moved to Gracewell after my highest recommendation!”

“I am so glad that I made the decision to come here – this is without doubt my new home. My wife has passed and I do not have any children but my family is now Gracewell of Frome and I have become an extension of Henry’s family.

I am thrilled to be an ambassador and share my very positive and happy experience.” 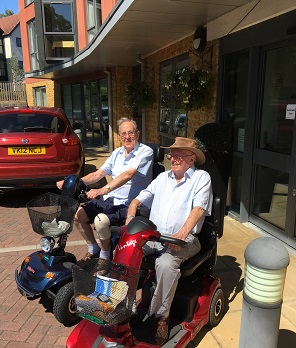 “We are very proud to have made Henry and Roly as our new Resident Ambassadors. Their experience of living at Gracewell of Frome has seen them find the home warm and friendly, with staff who know how to have a laugh – something which they are always keen to share with prospective residents. Our team has worked hard to ensure they have received the support they need in a place that feels like home and is supportive of personal choice and enablement to really live with purpose, which we hope their new roles will convey.”