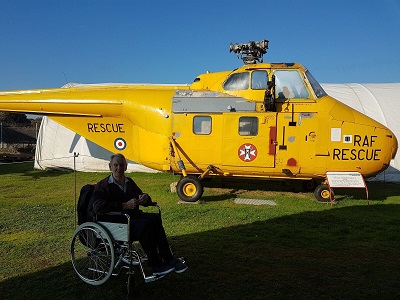 The team at Overbury House residential home in Wroxham, were delighted to arrange a visit for 97-year old Bob Marshall, a resident at the home, to the City of Norwich Aviation Museum; enabling him to recall personal memories of his time in the Royal Air Force.

Overbury House, which is part of the Healthcare Homes Group, works with residents to provide person-centred activities, and were pleased to be able to arrange the visit for Bob who has many memories of the time he spent in the RAF.  Bob, who reached the rank of Corporal, spent eight years with the RAF, where he would inspect aircraft for damage or repairs on returning from raids.

On visiting the museum, he was able to see first-hand a number of aircraft, including a RAF Westland Whirlwind rescue helicopter.  Bob was happy to share stories of his time in the RAF and 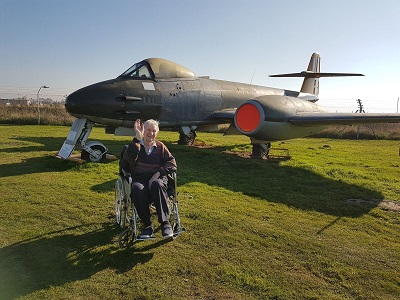 both the staff at the museum and the attending carer were educated on the workings of the aircraft, as Bob’s knowledge was imparted!

Confirms Bob: “I had a lovely time seeing the aircraft again. I spent a few years stationed in Norfolk when I was in the RAF, but also travelled the world. I went to New Zealand and also spent two months in Australia. It was great to go and see the aircraft again; bringing back lots of memories for me.”

Overbury House provides a range of residential care services, including to those living with dementia.  It is located on Staitheway Road in Wroxham.