A Poole care home has been awarded an ‘Outstanding’ rating by the CQC, placing it amongst the top 2% best run homes in England.

Colleagues at Bupa’s The Links were praised by the Care Quality Commission (CQC) for providing ‘exceptional care’ and ‘going the extra mile to ensure people continued to live fulfilling, happy lives.’

The report celebrates employees for tailoring care around residents’ individual needs, preferences and histories. For example, colleagues supported a former WWII RAF pilot, so that he could attend the wreath laying ceremony and church service on Remembrance Sunday. Because of this, the resident ‘had not been able to stop smiling for the rest of the day’.

Speaking of the achievement Gigy Johnson, Home Manager at Bupa’s The Links, said: “This is a great home, I’m so proud the team’s hard work to support all of our residents live full and happy lives has shone through in this inspection.”

Elsewhere, on learning that one resident used to enjoy going out on his motorbike, the activities co-ordinator arranged for a visit from a local motorcycle group, so that residents could see the bikes and share their own stories.

The report also cited the team for the work they have done to support one resident who liked to collect his newspaper from the newsagent every day. The resident can no longer do this safely by himself, so it is scheduled in the team rota that someone will always accompany him.

Inspectors praised the leadership at the home, citing how it’d had a positive impact on colleagues at all levels. In one instance they noted how all team members had received dementia training, including those from housekeeping and catering, so that they could provide better support to people as they were undertaking their duties. 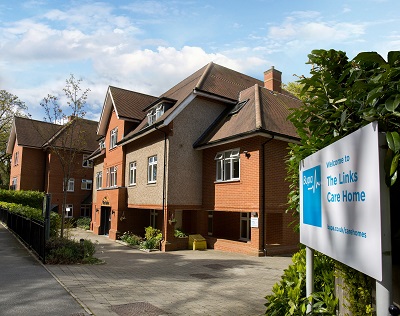 In addition to its person-centred care, the home was complimented for its meaningful and interesting activities, including a visit from an animal handler who introduced residents to exotic and unusual creatures including a tarantula, corn snake and millipede, which were well received by everyone at the home.

Joan Elliott, Managing Director for Bupa Care Services, commented: “Everyone at The Links goes the extra mile for their residents – nothing is ever too much and we’re so proud of the team there. To get an outstanding rating is a phenomenal achievement and I’m absolutely thrilled to see the team recognised with this rating – they thoroughly deserve it.”

Deborah Ivanova, Deputy Chief Inspector for Adult Social Care at the CQC, said: “The Links has a culture where the provision of consistent, high quality, compassionate care is at the heart of its operation.  It is clear that the staff and management are committed to providing individualised care and treating people with dignity and respect while encouraging independence.

Colleagues also demonstrated an exemplary approach to end of life care, explaining how they had created a basket of items to help residents feel comfortable and soothed. Items included special oils and scents, flowers, moisturisers and creams, candles as colourful lights and extra cosy blankets.

The care home received the ‘Outstanding’ ratings in both the ‘Responsive’ and ‘Well-Led’ categories of the report, ranking as Good in the other three areas. The overall rating was deemed Outstanding.

The Links is Bupa’s third ‘Outstanding’ home, alongside Bupa Eglantine Villa in Dartford and Bupa Tenterden House in St Albans.

Set in Broadstone, a small village a short distance from Poole, The Links provides care for up to 68 residents, including those requiring residential, respite, dementia and palliative care.  As well as benefiting from a modern interior and ensuite rooms, the home has two gardens for residents and is in easy reach of Dorset’s beaches and countryside.