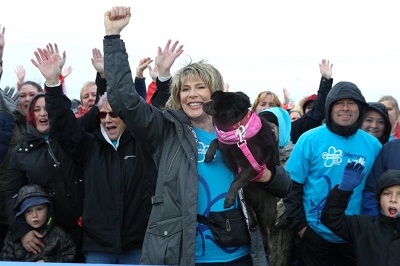 Alzheimer’s Society supporter Ruth Langsford issued a rallying cry to fundraisers after joining a tide of almost 2,000 people to unite against dementia in an “inspirational” Memory Walk.

The Loose Women and This Morning presenter brought along her dog Maggie as she kicked off her local Alzheimer’s Society Memory Walk which took place at Epsom Racecourse.

Ruth, whose dad Dennis sadly passed away in 2012 after living with Alzheimer’s for 13 years, then paid tribute to the walkers for coming together to raise funds to defeat dementia and raise awareness of the condition.

Ruth said: “I’m so happy to have been a part of the Epsom Memory Walk for Alzheimer’s Society, standing alongside everyone fighting for the same cause.

“Memory Walk brings together carers, those living with dementia and those who have been affected by dementia.

“When my Dad was diagnosed with dementia my family felt lost and didn’t know much about the disease.

“But that was 16 years ago and thanks to the Alzheimer’s Society things have progressed and we can raise the awareness of dementia through events like these.”

Ruth added: “The Memory Walk is always such a fun day out for family, friends and the community to rally together to unite and fight dementia.

“I’ve done the walk for eight years now and find the occasion more and more inspirational every year.

“There’s still time to get involved, with Memory Walks up and down the country taking place. I hope everyone gets involved so we can raise the funds needed to find a cure for dementia, for everyone we love.”

Ruth is among 100,000 people who are taking part in 40 Memory Walks this autumn and the charity is hoping they will generate as much as £9 million to help people affected by dementia.

Of the top 10 causes of death, dementia is the only one that cannot be prevented, cured or slowed down. Research will beat dementia but more funding is urgently needed to find a cure.

Alzheimer’s Society is committed to spending at least £150 million over the next decade on dementia research – and Memory Walk will help to raise vital funds towards this.

“We are enormously grateful that Ruth – and lest we forget Maggie – are rising to the huge challenge it poses by uniting with Alzheimer’s Society to help us defeat dementia.

Alzheimer’s Society is urgently calling on people to unite against dementia and take part in Memory Walk – register now at: memorywalk.org.uk