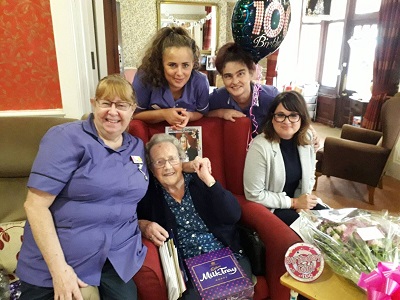 A resident at Maynell House care home in Felixstowe has celebrated her 100th birthday, marking the occasion with a special party with family and friends. Marjorie Theobald has been a resident at the home on High Road East since March 2018 and celebrated her centennial year on the 5th September.

Marjorie was born in Faversham in Kent and began her working life as a telephonist.  She married her husband Reginald in 1941 and continued her work as a telephonist during the war.  She recalls the phone boards lighting up when her local airfield was bombed.

Reginald was an architect before enlisting in the army, and became part of the Phantoms, an elite army corps. She welcomed her son Peter into the world in 1942 who was followed by a sister four years later.  After her husband was blinded in Africa during the war, he retrained as a physiotherapist and eventually moved to a job in Ipswich.  Marjorie retrained as a receptionist to support his private practice; a job she continued alongside him for many years.

Marjorie and Reginald enjoyed sailing their boat together and were regular travellers on cruise holidays. She now enjoys being a grandmother and great grandmother in her large family.

Staff and fellow residents at Maynell House marked Marjorie’s birthday with tea and cake, followed by a family party at the home.  She also received a card from the Queen.  Home Manager Magda Kurdziel said: “Everyone at Maynell House would like to wish Marjorie a very happy birthday. It was a real joy to celebrate her special day with her and I hope she had a fantastic time, surrounded by her family and friends.”