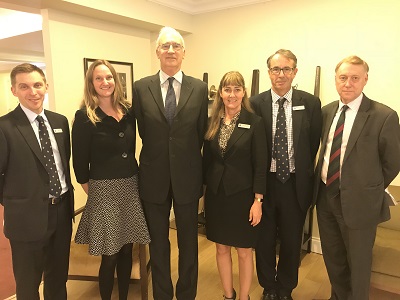 ABF The Soldiers’ Charity has visited The Royal Star & Garter Homes in Surbiton to see how its grants help the Army veterans who live there.

ABF The Soldiers’ Charity has a proud history supporting The Royal Star & Garter Homes. Its latest grant of £60,000 was awarded to help fund physiotherapy care, speech and language therapy, outings and other benevolent activities to Army residents living at the Homes in Solihull and Surbiton. Of the veterans the Charity cares for, 52% are ex-Army and the invaluable support offered by ABF The Soldiers’ Charity make a significant contribution to the life-enhancing therapies and activities available to the residents.

Earlier this year ABF The Soldiers’ Charity also awarded a grant of £102,400 to fit out eight bedrooms at the new Royal Star & Garter Home in High Wycombe.

During the visit guests were shown around the award-winning home, which cares for veterans and their partners living with disability or dementia. They visited the specialist dementia care area and the physiotherapy room, where they saw some of the equipment used by residents, and met Army veteran Stephen Vause, who was severely disabled following a bomb blast in Iraq in 2007.

After the tour, Major General Wood said: “I can honestly say these are the most impressive facilities I have ever seen in terms of the quality of care, the compassion of the staff and the atmosphere, it’s just hugely impressive. It’s great work and I’m sure ABF The Soldiers’ Charity will continue to want to support The Royal Star & Garter Homes in what they deliver.”

Andy Cole, Chief Executive of The Royal Star & Garter Homes, commented: “We were delighted to show our guests from ABF The Soldiers’ Charity around the Surbiton Home so they could see how they help us support all of our Army residents. With ABF’s most recent support, eight bedrooms in our new High Wycombe Home will also be fully furnished. We are extremely grateful for the strong partnership we have with the charity.”