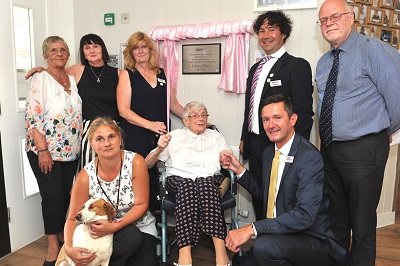 A company-wide commitment to delivering great care has seen Care UK achieve its third outstanding rating from the CQC.

Cleves Place care home in Haverhill, Suffolk has just joined Mildenhall Lodge, also in Suffolk, and Broadwater Lodge in Surrey in the small group of homes nationally to receive this very top rating from the regulator.

Of a total of 102 Care UK homes in England inspected by the CQC,  another 83 are now rated as good. Nine of these 83 have already seen one of their five key lines of enquiry rated as outstanding indicating a level of care well above the national average.

Care UK’s CQC scores now show it is standing at the top of the league table when comparing the regulator’s ratings for the five largest care home providers.

The inspector’s report for Cleves Place speaks warmly about the ethos of the home, in particular its focus on treating residents as individuals and with respect – always carefully seeking their thoughts and opinions.  The report includes many examples of the kind of care the home provides – for example, one relative is quoted saying that their loved one has ‘more of a social life than me’; a resident told inspectors: ‘When I want to go to the shops one of the carers just comes with me’ and the expressions  ‘home from home’ and ‘loving’ crop up more than once.

Key social features of the home were commented on favourably by inspectors including the in-house  cinema and the care home’s pub, the ‘Dog and Parrot’, also named by residents. The ‘Stowbridge Café’ and the home’s resident rescue dog, Noella, were also praised in the report as being great social opportunities for residents. Not to mention the recent addition of the ‘gentlemen’s corner’ featuring armchairs, books, a record player and a full-size snooker table and the opportunity to attend a men’s club in the local town.

Inspectors were also impressed with the sensitive way the home team handle the death of a resident with special mention given to the way they puts a velvet ribbon on the door of the room used by the late resident so that visitors, residents and team members know what has happened.  Team members also set out a small table in a communal area of the home with flowers, a candle and a photo of the person who has passed away which is much appreciated by relatives as a way of remembering someone

Commenting on the ‘outstanding’ rating, home manager at Cleves Place, Sally Shadbolt, said: “I’m delighted the CQC’s inspectors have rated us ‘outstanding’. We strive to create a caring, supportive atmosphere here at Cleves Place so it’s brilliant to have all of our hard work recognised by a national body.

“I’m incredibly proud of the team and our ‘outstanding’ rating just shows the dedication and commitment each one of them has in making Cleves Place a fantastic place to live. I would like to say thank you for their hard work – something which I know is echoed by the residents’ families.”

Perhaps most tellingly though is the line in the report which says that, after the inspectors had left, 11 relatives contacted the CQC wanting to share their experiences of how the home supported their family member living at Cleves Place.  One of these relatives said ‘The staff are, without exception, extremely pleasant and caring and go out of their way to make each resident feel special.”

To celebrate their success, the team at Cleves invited residents and colleagues from the nine other Suffolk homes plus support teams and social care representatives from Suffolk County Council to a lunchtime party with food, speeches and music.