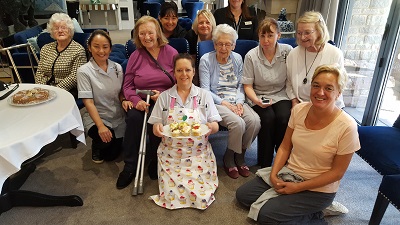 carer in Camberley, Surrey, is going to attempt to break the Guinness World Record for decorating six cupcakes in aid of MacMillan Cancer Support.

Mel Harrison of Aura Care Living’s Kings Lodge smashed the record of 47.21 seconds, held by Ashish Spencer of India with a staggering time of 23.86. The challenge was to decorate the popular tiny cakes

Mel completed the feat on 28 September in conjunction with Macmillan’s World’s Biggest Coffee Morning. It is the charities biggest event and raised over £27 million last year. Kings Lodge will also have its own coffee morning for residents and their families.

Money raised via staff and residence of Kings Lodge care home will go to MacMillan as part of their nationwide coffee morning (today 28.09.18)

Mel said: “I was incredibly nervous with everyone watching as I had practiced at home with just my daughter all week. I may have got a little carried away with the decoration as I think it was only supposed to be piped icing and a cherry.

“Cancer is a cruel disease and has affected me personally as well as some of our residents. I just wanted to do something for such a worthy cause.”

Aura Care Living director Peter Lloyd added “well done Mel, she is always trying to provide a bit of fun in Kings Lodge. Now we get to eat the cakes and all for Macmilllan. We will be sending the video to the Guinness Book of Records to see if we can get it in the official book.”