Daniel Bradbury, who hit the headlines early this year after being diagnosed with dementia aged just 30, has wed his partner of 12 years, Jordan, surrounded by close friends and family – including their two year old twins, Lola and Jasper.

The couple married on Saturday 11 August at Arnot Hill Registry Office in Nottingham, only a couple of months after Daniel romantically proposed to Jordan whilst on a family holiday. The couple planned the wedding in a matter of weeks, determined to enjoy the celebrations before the effects of Daniel’s condition take more of a hold on their lives. Alzheimer’s Society ambassador and Nottingham resident Vicky McClure joined Daniel and Jordan on their big day. Vicky and they have become friends since working together on an upcoming BBC documentary, My Dementia Choir.

Speaking about the day, Jordan Bradbury said “We had such a special and memorable day. We felt like we blinked and the day was over but we couldn’t be happier with how Dan was feeling on the day, and how supportive our family and friends were. A lot of them travelled from all over the UK to join us on the day and that meant a lot to Dan and I. I cried through most of my vows. Emotions were high and it just meant so much to me to be able to make my promises to him on this bittersweet journey.

“My personal highlight on the day was seeing Dan looking dashing in his suit and the beautiful handwritten vows he spoke me to me at the ceremony. He later told me that he meant every word and in the future when he’s unable to tell me each day and when his memory fades that he hopes I remember and cherish those words as it is how he will always feel about me.”

Daniel and Jordan met in 2005 as they both worked in a local high street store whilst attending college, Daniel was just 19 and Jordan 18. 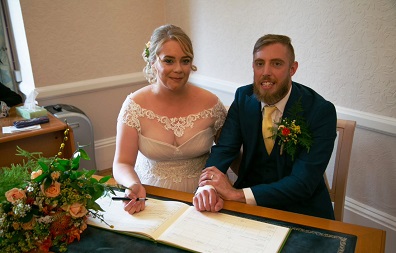 Recalling this time, Jordan said “It started out a friendship really – it always so happened that we ended up working the same shifts and got to know each other. We had some mutual friends so we started hanging out, going for walks, going to gigs and just doing the normal things that people in their late teens tend to do. It was during this time that we started to develop feelings for each other and fancy each other and we just naturally formed a bit of a relationship. Dan officially asked me out on 1st May 2006 and we have been together ever since – he asked me by text first but I said he needed to do it properly, in person, so he did and the rest was history.”

Over the next few years, Daniel and Jordan started to build their lives together, both moving onto new jobs after college, buying and renovating a house and eventually having their twins in 2016.

Jordan added “We always spoke about marriage and knew it was going to happen but we didn’t want to put any pressure on it. We spoke about it again after we had the twins, feeling it would really be the final piece to our jigsaw. Then of course Dan started to get unwell and our main focus was on him and his health rather than planning a wedding.”

Daniel was diagnosed with dementia in September 2017 after experiencing some symptoms such as problems with his short term memory. He has a very rare form of Alzheimer’s caused by a mutation in the gene called PSEN1, having inherited the gene from his father Adrian who passed away from the condition himself in 1999, aged just 36. There is a 50% chance that Lola and Jasper also have also inherited the gene from Dan.

Someone develops dementia every three minutes in the UK, with 1 million set to have the condition by 2021. People with young onset dementia, those who develop it before the age of 65, account for around 42,000 of dementia cases in the UK. Cases of inherited dementia are very rare and young onset dementia does not necessarily mean you have an inherited form of the condition.  It’s estimated that only around 600 families worldwide have an inherited form of dementia that is passed down through the family, such as via the PSEN1 gene. People with one of these rare genetic versions tend to develop the disease at a young age, even in their 30s or 40s.

Following his diagnosis, Daniel and Jordan have focussed on making memories as a family and fulfilling Dan’s bucket list which includes a holiday of a lifetime to Disneyland – which they’re taking as a belated honeymoon later this year – and seeing the twins off for their first day of school.

Jordan says “When Dan was diagnosed I actually asked him to marry me and he said no and I was really gutted. Unbeknown to me, he had actually gone straight round to my mum’s the next day and told her the reason he had said no was because he wanted to propose himself, and make it really special.  He asked her permission to marry me, swore her to secrecy and took few months to plan this special proposal.”

The proposal itself took place on 30 May whilst the couple were on a cruise holiday with their families.

Jordan said “Dan and I went up to the top deck to have our photo taken and this music came on, Light by Sleeping at Last, which is one of my favourite songs which I remember thinking was quite odd. Dan got down on one knee and proposed – I of course said yes, he is my best friend and I love him to pieces.”

“We quickly decided that it would be the sooner the better for the wedding.  Given Dan’s dementia and how this is starting to affect his mobility, we wanted it to be a day we could really enjoy.”

Their wedding day was a family affair, with their daughter Lola was a bridesmaid, and son Jasper as a page boy, wearing miniature version of their parents’ outfits. Aside from the venue, Daniel’s suit and Jordan’s dress, the couple left much of the planning to their families and were surprised on the day with touches like handcrafted decorations at the reception, all organised by their loved ones.

Jordan added “Life is already really stressful with two small children and Dan’s dementia so we just didn’t want the stress of all these decisions around the wedding. We just wanted to marry each other because we are best friends and that is really all that mattered.”

“We tried to make the day a dementia free zone. We do have some really bad days as a family because of it and with so many appointments, it can sometimes feel like it has taken over your life. On the day we just wanted it to be about two normal people, enjoying their wedding day. Dan is still Dan and it is really important for people to acknowledge that.”

“All our family have cancelled their holidays this year to come along with us on our once in a lifetime trip to Disneyland in November, which will be lovely. Ideally we wanted to take the kids when they were older so that they would remember the trip as well but because of the circumstances, we have had to bring this forward and make memories while we can. We also have plans for later on in the year like another wedding we are attending, a weekend away and Christmas but the big thing will be our holiday.

“The main thing with dementia is always having something to look forward to even if it is just a day trip somewhere or a night in with family because it gives you a break from what can be the dementia bubble.”

The family, along with their friends and other relatives, are also taking part in their local Memory Walk in Nottingham on 8 September. Daniel and Jordan are also encouraging families, friends and colleagues to unite against dementia and take part.

Last year over 92,000 walkers joined the dementia movement by taking part in Alzheimer’s Society’s Memory Walk and raised over £7million – this year the charity hopes to raise £9 million.  Every pound raised will raise vital funds for Alzheimer’s Society to help fund research, improve care and create lasting change for people affected – like Daniel. Shortly after diagnosis, the family benefitted from a Dementia Adviser accessed through the charity, who helped them to understand their entitlements and provide much needed support.

Jordan said “We wanted to take part in Memory Walk this year and walk for people with dementia past, present, and future to raise awareness and money for vital dementia research. Together if we make a stand, we can find that cure. We just need to be proactive, work hard and raise that money. It’s not impossible.”

“On behalf of Alzheimer’s Society, I would like to congratulate Daniel and Jordan on their wedding. Their brave decision to share their story earlier in the year has not only helped to raise awareness of dementia for the 850,000 people currently living with it across the UK, but now their support for Memory Walk will help to raise vital funds to help us defeat dementia through research.

“Dementia devastates lives, but every pound raised through Memory Walk will help Alzheimer’s Society provide vital information and support, improve care, fund research and create lasting change for people affected by the disease. I would urge readers to unite with us and join a local Memory Walk today.”

Alzheimer’s Society is urgently calling on people to unite against dementia and take part in Memory Walk – register now at memorywalk.org.uk