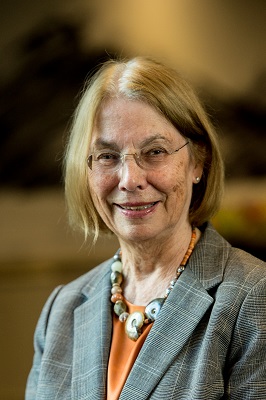 IT’S not every day that you can claim to be the longest serving volunteer. Ingirid Deuling, currently a volunteer at Allan Park House in Stirling and a Bield board member, looks back on 35 golden years of volunteering and the experiences that have helped enrich her own life.

I can’t believe 35 years have passed since Alistair Green, former CEO of Bield Housing Association, invited me to join the Housing Management Committee. Since 1983 my involvement with Bield has continued and developed – so I guess I must be the longest serving volunteer.

Over the years I have witnessed many changes of direction which the organisation has taken, including a change of name. Bield has grown in size and stature to become a major Scottish player in the field of housing for older people. Technology has played its part, as has the expectations of tenants and service users.

Personally it has been an incredible journey, as previously my professional knowledge of housing associations was limited to visiting patients or clients living in sheltered housing or mainstream housing.

Bield has taught me so much about housing which eventually led me to take up my final job (before retiring) as the first Housing Occupational Therapist appointed to a Scottish local authority. However, it’s the staff and tenants of Bield who have given me the most support and increased my awareness, skills and knowledge of the housing sector.

I joined the Bield board in 2006 and served on various committees. In 2012, under the new governance arrangements, I became a member of the Remuneration Committee and last year was appointed chair of this committee. During the past 35 years I have visited many developments, large and small, where I’ve had the opportunity to meet staff and tenants and hear their stories.

When not wearing board or committee hats I have also been volunteering at Allan Park House, Stirling since 2012. Initially I was a social activities volunteer, before setting up a chair exercise group for tenants. This group sadly folded in late-summer 2017 mainly due to changes in the tenant population. I then reinvented myself to become a befriender to one of the older tenants who used to be a member of the chair exercise group.

Volunteering at a development is a very rewarding experience as you become involved with the tenants and participate in a variety of activities. Nowadays, Bield tenants certainly know what they want from life and from their housing provider. They have taken me to their hearts and thankfully ignore that I’m also a board member.

Last year my family took on a new Westie puppy, named Ola, to our family and she has become a regular visitor at Bield developments and offices. An experience that has stayed with me occurred last November when my husband and I were invited to visit Mary’s Kitchen at Whitehill Court, Kirkintilloch.

It was winter so we did not want to leave our puppy at home alone or in the car when we visited the development. I contacted staff prior to the evening who then went out of their way to make arrangements to look after Ola. She joined a service user on respite at the development while we attended Mary’s Meals for dinner. The service user was delighted as she used to have a dog so very much enjoyed having Ola sit on her knee – and, of course, Ola loved the attention!

Volunteering with Bield has given me great pleasure and lots of fun times with many rewarding opportunities at both board and development level. Hopefully in return I have been able to contribute something to the workings of the organisation and perhaps enhanced the lives of tenants and service users along the way.