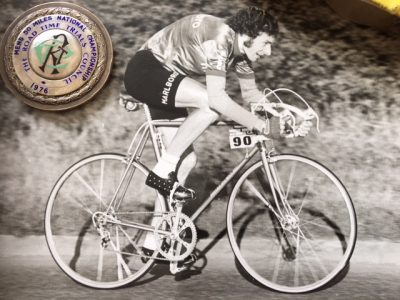 Graham West, who is a resident at Gracewell of High Wycombe, has led an extraordinary life competing as a national cyclist. Following the excitement surrounding the recent British Tour De France win, Graham has shared his passion and life-long love of all things cycling.

Graham’s passion for cycling and motor bikes has been a life-long love, and continues to bring so much joy and happiness to his life. He has been a member of the Marlboro Athletic Club since the mid-60’s, where he still remains a loyal member. The club is now purely for cycling and socialising and Graham has spent many years there racing in time trials, road races, track racing and cycling tours.

Graham has also enjoyed spending his time tinkering with motorbikes. He owned a Gilera and constructed a Triton (a Triumph engine and Norton frame). Graham has always claimed that he was not interested in the speed aspect of motor bikes, but rather enjoyed the engineering challenges they posed instead.

One of Graham’s proudest moments on the bike was his victory in the National 50-mile Time Trial Championship in 1976. All of Graham’s family and friends are immensely proud of this achievement – however, non-more than his devoted wife, Chris. Over the years, Graham has encouraged his family to share his love of cycling. He and his wife Chris enjoyed many cycling holidays in their time together, travelling all around the UK and beyond. The couple have explored Shropshire, Dorset and Suffolk as well as Crete, Corfu and Majorca all atop a bike.

Graham’s wife Chris describes her husband as maintaining a happy and light-hearted attitude towards everything, “his practical jokes throughout both his working and home life are legendary and many people have been on the receiving end of his cheeky sense of humour!”.

Graham was born and raised in North London and overcame a bout of Polio at the young age of three. However, this did not stop Graham from living his life to the full, particularly when it comes to cycling. He spent his working life at The Metal Box Company as a Technical Artist, as well as being a Sea Cadet. Graham’s job was extremely complex, and he was responsible for drawing “blown up” images of the canning and packaging lines. This job was completed by hand in the days before computers, when one drawing could take up to 6 weeks to complete.

Graham also developed an interest in Tall Ships during his teenage years. This resulted in one of his ship models being exhibited at the Model Engineer Exhibition. He enjoyed sailing his models at Kensington Round Pond and took his passion to sea on several “working holidays” where he sailed such ships as The Sir Winston Churchill and The Prince William.

As a resident at Gracewell of High Wycombe, Graham enjoys sharing his stories, experiences and passions with his fellow residents and the Gracewell team.