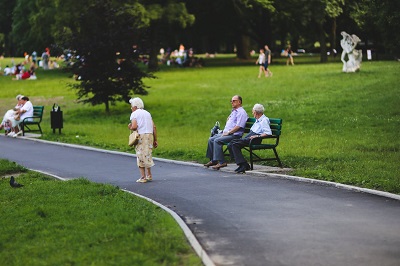 A new report commissioned by Age UK highlights the different approaches to long-term care across a group of countries in the developed world, and how they compare to the system in England.

The Incisive Health report ‘An international comparison of long-term care funding and outcomes: insights for the social care green paper’ set out to explore key characteristics and outcomes of the social care systems operating in some other advanced nations, with a view to seeing what lessons could be learned and potentially applied here in England. The other countries were Italy, Spain, France, Germany and Japan.

The findings suggest that creating a sustainable social care system fit for a rapidly ageing population is a challenge in every one of these countries, which none has completely overcome. However, most of the countries featured in the report have grasped the nettle and implemented significant reforms during the last 25 years. For example, Germany began to modify its system in 1995 and Japan in 2000.  Over the same period, despite two Government consultations, two official Commissions, five Green or White Papers and one Act of Parliament[i], England’s system of means tested care funding is broadly unchanged.

It is notable that England has a stricter means test than the other countries examined in the report. England has a fixed means test limit for all long-term care services, meaning anyone with savings or assets above £23,250 has to pay all the costs of their long-term care (with tapered means tested support available to those with savings and assets between £23,250 and £14,250). Even those with savings and assets below the £14,250 threshold will still be expected to pay a contribution towards the costs of their care through a deduction from their State Pension. Other countries have more progressive systems, either providing a non-means tested basic level of support (Germany), capping the level of co-payment for all (at 10% in Japan), or using a more generous and gradual means test (France).

England and Germany both rely on citizens making high levels of out-of-pocket payments to fund their own care. In the UK, this amounts to 33% of the overall spend on long-term care. In Germany, mandatory social care insurance covers the costs of basic care with out-of-pocket expenditure only expected to pay for anything additional.

England also has a system with noticeably less risk pooling than other countries for the non-health aspects of the whole person care that people often require. In addition, in England long-term care needs which are paid for by the NHS are covered totally with risk completely pooled through the Continuing Health Care scheme, whereas needs that fall under the social care system have very limited coverage, with all the risk borne by the individual. This stands in contrast to the other countries included in the report where health and long-term care systems are more similar to each other, and this in turn means that people with dementia, for example, get a much better and fairer deal than they do here, where public outrage erupted last year over the so-called ‘Dementia Tax’ – something that would not have been possible in these other nations.

The report also finds that:

–       The evidence suggests that roughly similar levels of family caring exist here as in other European countries, tackling the misconception that in other countries families are often doing more

–       Italy’s system is notable for being highly localised. The authors conclude, drawing especially on experience there, that the greater the degree of devolution in terms of social care, the greater the potential for variance in the quality and funding of services. Reliance on local fund raising in combination with local discretion over access criteria, as in Italy, in particular risks major variations in quality. Here in England the IFS estimates that if the position remains as it is today, even with above inflation increases to local taxes, the proportion of local authority budgets spent on adult social care will increase from 30% today to over half by 2030.[ii]

–       No country included in the study has succeeded in fully integrating health and care, with differing financial models often proving an insurmountable challenge. For integration to be driven further in England, the authors say a solution will have to be found which allows recipients to seamlessly transition between the currently ‘free’ health services and ‘paid for’ long-term care.

–       In financially distressed social care markets, quality is better ensured by a system based solely on service standards, rather than price competition. For example, in Japan, the price of services is set nationally with recipients able to choose provider. This is said to keep quality high, with providers unable to undercut each other as happens here. A damaging ‘race to the bottom’ is therefore avoided.

“Sadly, this new report shows that England has been left behind in the race to update the funding of care for older people, compared to some other similar nations. As a result, our older people and their families are paying more and bearing a lot more of the risk of needing expensive long term care. What’s more, the freezing of thresholds and allowances in recent years has made our offer to older people in this country even stingier.

“The reality is that an entire generation of older people in England has lost out, given that Germany embarked on care funding reforms in 1995 and Japan in 2000. Here, we have had to make do with a succession of consultations gathering dust. It is crucial that the forthcoming Social Care Green Paper isn’t yet another failed exercise. The evidence from other countries is that a package of measures that significantly improve the care offer to older people attracts a lot more public support than something more timid – the public isn’t stupid and will demand good value in return for paying more. Our Government needs to take note and develop some exciting proposals that will really make a difference. Bringing our care system up to a decent standard and making it sustainable won’t happen overnight and as citizens we will all need to contribute to the cost in different ways, but if they can do it in these other countries surely we can here too. And the sooner we start the better.”

“The social care system in the UK is in crisis. Recent budget cuts have combined with decades of political inaction to a leave an outdated system struggling – and in some cases failing – to deliver care to the standard we all expect.

“The ripples of this crisis spread throughout the public sector, with local council budgets increasingly pushed to breaking point and the NHS left with large numbers of ‘delayed transfers of care’ – with older people trapped in hospital because no social care service is able to care for them in the community.

“The Green Paper must grasp the nettle of this challenge and propose a realistic and funded plan to address the immediate crisis, as well as delivering longer term reforms to ensure the fairness and sustainability of England’s social care system. Ducking the issue cannot be an option.”

[i] 1996 – Government consultation: A new partnership for care in older age

1999 – Report of the Royal Commission on Long Term Care: With respect to old age

2006 – Government White Paper: Our Health, Our Care, Our Say

2009 – Government Green Paper: Shaping the future of care together

2013 – Government legislation: Care Bill (Care Act 2014 legislated for a cap on costs and amendments to mean test, however these have never been implemented)